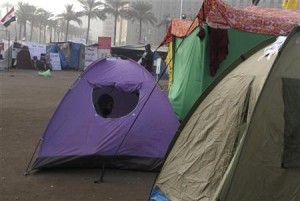 Egyptian youths camped out on Thursday in Cairo’s Tahrir Square and vowed to stay put until the army hands power to civilians, a day after a mass demonstration marked a year since an uprising which brought down Hosni Mubarak.

Tens of thousands of Egyptians poured into the square and onto streets of other cities for the January 25 anniversary of the day the revolt began. Although good-natured, the demonstration exposed rifts in the Arab world’s most populous nation.

The Tahrir crowds were broadly split between youths demanding the army cede control to civilians immediately and Islamists celebrating a political transformation that has handed them sweeping gains in parliament after decades of repression.

Sit-ins have in the past sparked violence when the police and army have sought to clear protesters out, but on Thursday the scene was peaceful.

Scores of youths occupied the square surrounded by dozens of tents pitched on traffic islands. Vendors sold hot drinks and some activists huddled round open fires to keep warm in the morning air.

The army council took over when Mubarak was ousted and is led by his defense minister for two decades, Field Marshall Mohamed Hussein Tantawi. It has insisted it will hand power to civilians after a presidential election in June.

But many activists say they fear it wants to hold onto power behind the scenes.

Although troops were cheered when they were ordered onto the streets in the uprising, they have since drawn the wrath of many for heavy-handed tactics against protests demanding they go back to barracks.

“There will be a sit-in until they leave,” said Alaa Abdel Fattah, a blogger and activist who was detained by the army after clashes outside state media offices killed 25 protesters in October.

In Alexandria, a Mediterranean port that is Egypt’s second-biggest city, about 100 protesters had also set up tents late on Wednesday near police headquarters, demanding the army hand over power immediately.

Mubarak, 83, is on trial for his life and a new parliament was installed this week that is dominated by his Islamist adversaries. But many youthful activists who launched last year’s revolt are weary of army rule and worry that Islamists may stifle their hopes of a deep purge of the old order.

The activists fear Islamists will make political concessions to the army as they seek to secure their new gains in mainstream politics.

The Muslim Brotherhood, which now has the biggest bloc in parliament after the first free election in decades, and other Islamists deny any deals with the military.

The once banned Brotherhood had warned against a sit-in but said some of its members stayed in the square to help it stay peaceful.

The army and police kept their distance from the square during Wednesday’s demonstration in an apparent effort to ensure there was no cause for friction.