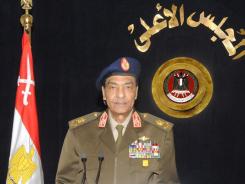 Egypt’s military ruler on Tuesday decreed a partial lifting of the nation’s hated emergency laws, while saying the draconian measures would still apply to crimes committed by “thugs.”

Field Marshal Hussein Tantawi said in a televised address to the nation that the emergency laws would be lifted effective Wednesday, the first anniversary of the start of the popular uprising that toppled longtime authoritarian ruler Hosni Mubarak.

Tantawi and the Supreme Council of the Armed Forces he chairs took power when Mubarak stepped down on Feb. 11, 2011.

His decision to partially lift the decades-old laws, which give police far-reaching powers, would likely not satisfy rights groups that have been campaigning for the total removal of the laws. They have complained about the repeated use by the military of the term “thugs” to justify crackdowns on protesters.

Rights groups say at least 12,000 civilians have been tried before military tribunals since the generals took power nearly a year ago. Many of them, they say, were charged with acts of “thuggery” when, in fact, they were protesters.

The term has been used to ridicule the military in the independent press, and some of the young protesters in recent demonstrations have been chanting, “we are thugs!”

At least 80 protesters have been killed by troops since October.

Tantawi was Mubarak’s defense minister for some 20 years, during which he was known to be unquestioningly loyal to the ousted leader. He and the generals on the military council, according to activists, remain beholden to Mubarak, whose approval was essential for their promotion through the ranks. Mubarak ruled for 29 years, and the emergency laws were in force throughout.

A sullen faced Tantawi, who is in his 70s, renewed past pledges that the military would return to the barracks when power is handed to a civilian administration.

Tantawi’s address came one day after Egypt’s first freely elected parliament in decades held its inaugural session, a significant step in the handover process. The election for the 508-seat chamber was held over a six-week period starting Nov. 28. The Islamist-dominated legislature’s first priority is to name a 100-member panel to draft a new constitution. The next step would be to put the draft to a vote in a nationwide referendum whose date has yet to be announced.

Presidential elections are to be held before the end of June, and the military has said it would return to its barracks when a new president is sworn in.