US Senator ‘detained’ by TSA at Nashville airport 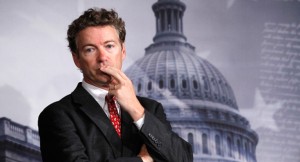 “Just got a call from @senrandpaul,” Bagley tweeted at about 10 a.m. on Monday. “He’s currently being detained by TSA in Nashville.”

Texas Congressman and current Republican presidential candidate Ron Paul – Sen. Rand Paul’s father – placed a post on Facebook about the news as well. “My son Rand is currently being detained by the TSA at the Nashville Airport,” Ron Paul posted. “I’ll share more details as the situation unfolds.”

Ron Paul adds, via Twitter, that the TSA detained his son “for refusing full body pat-down after anomaly in body scanner.”

Sen. Rand Paul’s chief of staff Doug Stafford told The Daily Caller the Senator “was detained by the TSA after their scanner had an ‘anomaly’ on the first scan.”