Nigeria stunned by Kano attacks that killed more than 150 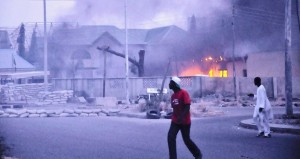 A militant Islamic group whose almost daily attacks have put Nigerians on edge left the country stunned Saturday after a well-coordinated strike with disturbing echoes of Al Qaeda’s brand of mayhem.

More than 150 people were killed in the Friday evening carnage in the northern city of Kano. The group Boko Haram claimed responsibility for the attacks, whose targets included the secret service headquarters, an immigration office and a passport office.

It was the group’s most deadly strike, far exceeding previous death tolls.

Boko Haram, which wants to impose sharia, or Islamic law, on Nigeria’s 160 million people, killed more than 500 people in almost daily attacks last year. Before Friday’s violence, it had killed more than 70 people this month.

U.S. officials have expressed fear that the group, whose name means “Western education is sacrilege,” may be getting support and training from Al Qaeda affiliates on the continent, given the increasing sophistication of its attacks and growing use of suicide bombers.

Nigeria is divided between the mainly Muslim north and the oil-rich, mainly Christian south. It has been plagued by terrorist attacks in the north as well as by sectarian killings, particularly in central Nigeria, and violent insurgencies, oil theft and piracy in the southern Niger Delta.

President Goodluck Jonathan’s response to Friday’s attacks fueled criticism, with many accusing him of failing to act decisively to prevent such violence.

In a statement Saturday, the president condemned the attacks and promised to find and prosecute the insurgents.

“These are honest and patriotic Nigerians who were brutally and recklessly cut down by agents of terror. As a responsible government, we will not fold our hands and watch enemies of democracy, for that is what these mindless killers are, perpetrate unprecedented evil in our land,” the statement said. “I want to reassure Nigerians … that all those involved in that dastardly act will be made to face the full wrath of the law.”

Kano, Nigeria’s second-largest city, is honeycombed with narrow alleys with open gutters. The unemployment rate is high, particularly among youths, and the northern region has long felt alienated and marginalized by southern politicians.

Witnesses described scenes of mayhem Friday night as battles raged in various parts of the city.

An immigration official, who declined to be named, said he was wounded when Boko Haram gunmen attacked, killing two of his colleagues. He survived by pretending to be dead.

“They shot me on the right shin, shattering my bone and another bullet pierced my shoulder,” he said. “I remained motionless and they left me for dead.”

In hospital morgues, bodies were piled up, and throngs of relatives of those missing waited fearfully.

“We now have 162 bodies deposited here by relief workers,” an attendant said an attendant in a morgue, where corpses were piled on the blood-splattered floor nearby. “The figure is bound to increase, as the rescue teams keep recovering bodies from different parts of the city.”

The attacks increase pressure on the president for a resolution of the crisis. Jonathan, a southern Christian whose election last year triggered violent protests in the north, had declared a state of emergency in four northern states.

The president faced a barrage of criticism on social networks of his handling of the crisis, a week after he faced furious mass protests over his attempt to ditch a fuel subsidy that sets prices below the market rate.

“Dear Nigerians, I am more than convinced that President Goodluck is not only clueless but the entire Cabinet is,” one message on Twitter said.

Human rights lawyer Shehu Sani said in a phone interview that Nigerians were fed up with Jonathan’s failure to prevent the bombings and shootings.

“He has proven incapable of protecting the lives of our people,” Sani said. “Right now there’s a lot of anger not just against the sect but against the government, which is incapable of discharging its duties.”