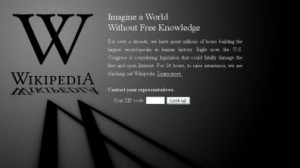 Can the world live without Wikipedia for a day?

The online encyclopedia is one of the Internet’s most visited sites, and at midnight Eastern Standard Time it began a 24-hour “blackout” in protest against proposed anti-piracy legislation that many leading websites — including Reddit, Google, Facebook, Amazon and others — contend will make it challenging if not impossible for them to operate.

It’s a dramatic response to the Protect Intellectual Property Act under consideration in the Senate and the Stop Online Piracy Act (SOPA) in the House, a pair of bills backed by the motion picture and recording industries that are intended to eliminate theft online once and for all.

Simply put, S. 968 and H.R. 3261 would require ISPs to block access to foreign websites that infringe on copyrights. Online piracy from China and elsewhere is a massive problem for the media industry, one that costs as much as $250 billion per year and costs the industry 750,000 jobs, according to a 2008 statement by Patrick Leahy (D-Vt.). But how exactly the bills would counter piracy has many up in arms.

“There are smart, targeted ways to shut down foreign rogue websites without asking American companies to censor the Internet,” Google spokeswoman Samantha Smith told FoxNews.com on Tuesday. The site joined Wikipedia by presenting readers with a black bar over its logo, and other websites have prominent SOPA protest content posted. But the online encyclopedia’s blackout is a line-in-the-sand action — and it isn’t sitting well with some of its volunteer editors.

“My main concern is that it puts the organization in the role of advocacy, and that’s a slippery slope,” said editor Robert Lawton, a Michigan computer consultant who would prefer that the encyclopedia stick to being a neutral repository of knowledge. “Before we know it, we’re blacked out because we want to save the whales.”

Wikipedia’s English-language site shut down at midnight Eastern Standard Time Tuesday and the organization said it would stay down for 24 hours.

Instead of encyclopedia articles, visitors to the site saw a stark black-and-white page with the message: “Imagine a world without free knowledge.” It carried a link to information about the two congressional bills and details about how to reach lawmakers.

The shutdown adds to a very vocal body of critics who are speaking out against the legislation. But the bill’s many supporters — including the Motion Picture Association of America (MPAA), the Recording Industry Association of America (RIAA), the U.S. Chamber of Commerce and News Corp., the parent company of FoxNews.com — argue that those critics simply misunderstand the bill.

“Anti-piracy legislation now before Congress finally addresses the threat of foreign piracy, and it’s unfortunate that so many opponents have resorted to inaccurate and flatly dishonest claims in an attempt to derail it,” said Timothy Lee, vice president of legal and public affairs for the Center for Individual Freedom.

Chris Dodd, chairman of the MPAA, denounced the blackout as a stunt, News.com reported. “[It’s] an irresponsible response and a disservice to people who rely on [the sites] for information and [who] use their services.”