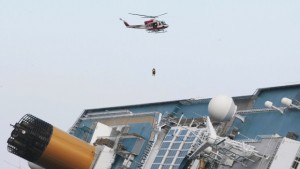 At first, Vivian Shafer said, she thought it was part of the magic show aboard her Mediterranean cruise.

During the show, aboard the Costa Concordia, staffers had been “playing with the lights” and using smoke, “so we really weren’t that alarmed,” she said Sunday.

Shafer said she and her traveling companion, Ronda Rosenthal, returned to their cabin after the ship gave a “shudder,” but were reassured by their cabin steward the ship was experiencing a “small technical difficulty.” And as the two got into bed, someone speaking on behalf of the ship’s captain made an announcement saying there was an electrical problem that would be fixed soon.

However, it became clear that something was amiss aboard the 1,500-cabin luxury vessel, after the two heard announcements regarding lifeboats and muster stations. They dressed, grabbed their life jackets and went to investigate, coming on a chaotic scene.

“We peeked around the corner to kind of see what people were doing … and my gosh, people were actually getting in a lifeboat,” Shafer said.

At least five people died after the Concordia ran aground on the tiny island of Giglio Friday night. Several others remained unaccounted for.

Survivors recounted a frantic rush by passengers to get on lifeboats, while the crew appeared helpless and overwhelmed to cope.

“There wasn’t anybody to help you,” Shafer said. “I mean, the passengers were loading the lifeboats by themselves.”

Compounding the problem was that only one side of lifeboats was available as the ship was listing. Passenger Laurie Willits, from Ontario, Canada, said some lifeboats on the higher side got stuck, leaving people suspended in mid-air amid the sounds of children crying and screaming.

“It was so crowded, and there was no room for us,” said Brandon Warrick, who was sailing with his siblings. They arrived late, he said Sunday, and “it was just bad, like mad scrambles to get into the lifeboats. Nobody followed any procedure. The crew was yelling for people to wait their turn and pretty much it was just a giant every man for himself, to get onto the lifeboat.”

He said his family hung back because “we didn’t want to make it worse.”

His sister, Amanda Warrick, said she thought several times that she might die, as they waited at least an hour and a half for more rescue boats after all the lifeboats departed.

As the ship took on water and listed to the side, “We were just holding onto the railing, trying not to fall,” Brandon Warrick said.

“I just remember standing on the decks,” Amanda Warrick said. “There were barely any people left.” She said she didn’t see any crew members “until the very last minute” and they were given no information about how long they would have to wait or whether any more help was coming.

Her primary concern, she said, was staying with her brothers. “There was no way that we were going to be separated.”

Carnival Corporation, the parent company of Costa Cruises, said in a statement Saturday that it was “working to fully understand the cause of what occurred. The safety of our guests and crew members remains the number-one priority of Carnical Corporation … and all of our cruise lines.”

Shafer said the only help they received from the crew was one young woman who approached her and told her to tighten her life vest.

“I was really disappointed and surprised,” she said. “The crew was so young. You would have thought they could have handled it better.” She said she thinks passengers should at least have been told to grab their coats, shoes and warm clothing.

Rosenthal said she believes the two waited at least 40 minutes to get on a lifeboat. The two had just embarked at the Italian port of Civitavecchia, she said, and had not undergone the mandatory safety drill, scheduled for the next evening. However, she had just taken a cruise and so she knew where the life jackets were stored, she said.

“Lack of communication was a big thing for me,” she said, “and it wasn’t the language barrier … it wasn’t handled at all like the previous cruise I had been on.” Even on shore, she said, people were wandering around aimlessly.

She said once she and Shafer got on board a lifeboat, people were angry with them, as the boat was crowded. She did not clarify whether the crew members or other passengers were angry.

Passenger Benji Smith on Saturday recounted making his own rope ladder to save himself and his wife.

“It was the Marx brothers, watching these guys trying to figure out how to work the boat,” he said. “I felt like the disaster itself was manageable, but I felt like the crew was going to kill us.”

Smith said even the safety presentation was more of a “sales pitch” for shore excursions.