Analysis: The cost of Syria’s crackdown

by yalibnan
449
Could the country's economic decline, spurred on by the protests, pose a graver challenge to al-Assad than the uprising?
Share: 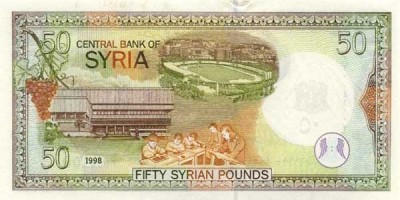 Ten months of protests and a violent crackdown have taken a severe toll on the Syrian economy. Its currency is weakening, the recession is deepening and the government is so short of cash that it has been forced to levy a special tax on state workers.

Analysts say the dramatic decision by Arab states to turn against President Bashar al-Assad has further damaged Syria’s economy. Some even believe this poses a graver challenge to al-Assad’s survival than the country’s uprising.

A recent report suggests public expenditure in 2011 has already increased by $19bn, mainly because of increased military costs, while public revenue has decreased by $2.31bn.

Cargo volumes passing through Syrian ports declined by 35 to 40 per cent in the first eight months of last year, losing the economy an estimated $6.1bn.

The Syrian ministry of economy says that food prices in the country surged at the end of 2011 – with some items increasing by up to 37 per cent – compared with the same period in 2010.

With the Central Bank’s currency reserves depleted, it will become trickier for the government to support the Syrian pound at the official rate of 47 Syrian pounds (SYP) to $1. On the black market the value of the pound against the US dollar has fallen to 62 SYP to $1, which means that Syrians have lost some 25 per cent of their spending power.

But as Syria’s economy staggers, some neighbouring countries could be key to providing a lifeline – despite the sanctions.

Firstly, Lebanon has strong political links with its larger neighbour and the Lebanese group Hezbollah is a key Syrian ally. Syria and Lebanon’s economies are closely linked too – Syria is Lebanon’s only overland trade route and several Lebanese banks operate in Syria. And Lebanon abstained from the Arab League vote in November to impose economic sanctions against Syria.

Syria’s second-biggest trading partner is Iraq, which also abstained from the Arab League vote. According to official figures, trade between the two countries reached nearly $3bn in 2011. And there are almost 250,000 Iraqis living and working in Syria.

Finally there is Iran, which is Syria’s closest ally in the region, and potentially its strongest economic lifeline. It has billions of dollars of investments in Syria, ranging from energy and construction to automobiles and cement. Analysts say Iran could help Syria by buying their crude oil, which is now under Western sanctions, or by allowing it to pay for imports in Syrian currency.

On this episode of Inside Syria, we ask: Is Syria facing a severe economic decline? And are Syrians finding ways around the sanctions and their country’s economic problems?

To discuss this we are joined by: Samir Seifan, a Syrian economist who used to be an advisor to the Syrian government but who now lives in exile; Ammar Waqqaf, a member of the Syrian Social Club, which is a group of UK-based Syrians supporting government-led reform of their country; and Mona Yacoubian, a senior advisor at the think tank The Stimson Center, where she directs its new project ‘Pathways to Progress: Peace, Prosperity, and Change in the Middle East’.

In his lengthy speech on January 11, al-Assad sought to stress the strength of the country’s economy, asking the people to turn from consumerism to productivity.

“We must put an emphasis on productivity and we are capable of, even in this crisis, to increase our productivity. We are aware that we have great point of strength, we have very low debt, we have good relations with great industrial countries, we are in the fifth or the fourth place in terms of production of olives.”

But in October 2011, Mohammad Nidal al-Shaar, the Syrian economy minister, described the country’s economy as being in a “state of emergency”:

“Unemployment is rising, imports are falling, and government income is reduced in areas where there are protests, there is no economic activity – so people aren’t paying tax.”

However, earlier this year, on January 3, al-Shaar presented a more positive view, declaring:

“The Syrian economy is still strong and the only solution to control the prices of goods is to support and develop the local industries and to increase the productivity.”

Facts about the Syrian economy