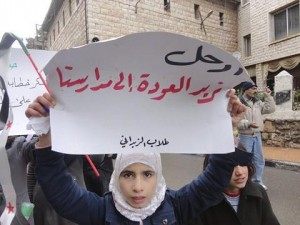 The chief of the Arab League warned Friday that Syria may be heading towards a civil war as thousands of Syrians took to the streets in support of an armed rebel group.

Arab League head Nabil Elaraby made the comments in interviews with The Associated Press and an Egyptian television station while anti-government protesters voiced support for the Free Syrian Army, composed mainly of former soldiers.

Activists say 20,000 gathered in the town of Ariha in the northwest Idlib province. The Syrian Observatory for Human Rights says soldiers opened fire on protesters in the region, killing at least one person.

The 10-month crackdown on anti-government protests has turned more violent in recent months as defecting soldiers have taken up arms against the government.

Elaraby spoke after at least 11 members of the Arab League observer mission were injured by pro-Assad supporters earlier this week. Meanwhile, one observer quit the monitoring team, calling it a “farce,” and activists say that 11 members are expected to quit the mission soon.