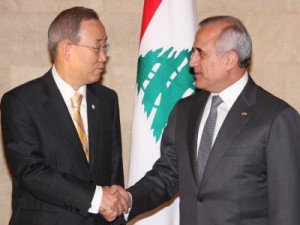 United Nations chief Ban Ki-moon who is in Lebanon on an official visit said on Friday that he is “deeply concerned” over the lack of disarmament of the militant and political group Hezbollah.

At a press conference Friday not far from Hezbollah’s Beirut base, Mr. Ban said he encouraged Lebanese leaders to “support and cooperate fully” with the tribunal investigation of the 2005 assassination of former Prime Minister Rafik Hariri.

Commenting on Hezbollah arms he said :

“We are very worried concerning Hezbollah’s military wing and we have discussed this issue very seriously. The U.N. is totally committed to removing these weapons because the presence of arms outside state control is unacceptable.”

Four members of Hezbollah have been accused in the bombing that killed Mr. Hariri and 22 others in the Lebanese capital. Mr. Ban said he hopes the U.N. body will renew the tribunal’s mandate that is due to expire at the end of February.

Ahead of Mr. Ban’s arrival, a Hezbollah official made clear that the U.N. chief is not welcome in Beirut. 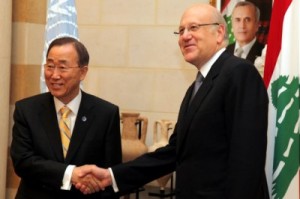 Hezbollah, Lebanon’s strongest political faction, has denied involvement in the slaying and has refused to hand over the four suspects to the Special Tribunal for Lebanon.

Mr. Ban has repeatedly called for Hezbollah to disarm. Hezbollah is the only Lebanese faction that has refused to lay down its arms following the 1975-1990 civil war.

The U.N. secretary-general commented on the situation in south Lebanon by stressing the role of the Lebanese army and extending its authority over the entire Lebanese territory :

“The situation in the South has been stable since 2006 and boosting the army’s presence in that area contributed to consolidating security and UNIFIL has been taking measures, together with the relevant authorities, to preserve security. But we must exert further efforts in order to guarantee Lebanon’s sovereignty and extend it over its entire territory. That’s why no weapons must exist outside state control and I have encouraged the government and President Suleiman to relaunch national dialogue to discuss the issue of arms. I have also encouraged further cooperation with the Special Tribunal for Lebanon”.

He added: “We call on Lebanon to abide by the U.N. resolutions, especially Resolution 1701 which ended the July 2006 war”.

During his press conference Mr ban touched on several other issues including the Syrian refugees in Lebanon and warned against their repatriation to Syria:

“A large number of refugees have surfaced and I have already expressed my deep gratitude to the government for hosting Syrian refugees. I stressed that the Syrian refugees should not be repatriated to Syria and that they should be treated in a humanitarian manner.” he said.

Commenting on the pro-democracy protests in Syria he said:

” It’s time to put an end to violence and to grant our peoples the chance they need for a better future.”

“We discussed the current situation in Syria and its repercussions on Lebanon and I’d like to thank the speaker and the premier for the role played by Lebanon at the Security Council.”

Commenting on remarks by a Hezbollah official that he was not welcome in Lebanon he said:

Commenting on the extension of STL’s mandate he said :

“As you know, the tribunal’s mandate expires on March 31 and Lebanon has to extend its mandate. As to the duration, this is something to be decided in cooperation with the government and the Security Council is engaged in consultations with the government over this issue.”

The U.N. chief said that the president and the prime minister of Lebanon voiced their commitment to protecting U.N. troops.