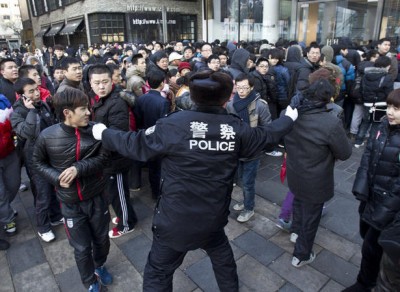 Enraged Chinese shoppers pelted Apple Inc’s flagship Beijing store with eggs and shoving matches broke out with police on Friday when customers were told the store would not begin sales of the iPhone 4S as scheduled.

Apple said later after the fracas at its store in Beijing’s trendy Sanlitun district that it would halt all retail sales of the latest iPhone in China for the time being, but said the phones would be available online, through its partner China Unicom or at official Apple resellers.

Sales at Apple’s other store in Beijing and three in Shanghai went more smoothly, with stocks quickly selling out.

An announcer with a bullhorn told the Sanlitun store crowd around 7 a.m., before sunrise, that the phones would not go on sale as planned and that they should leave. As the crowd became more unruly, scuffles broke out between security staff and shoppers, many of whom had waited overnight in freezing weather. Police moved in and dragged some people away. Photos appeared on the Chinese blogosphere of a man who had brought raw eggs in a plastic bag, handing them out before people heaved them at the store’s tall glass windows.

“We’re suffering from cold and hunger,” a man in his 20s shouted to Reuters Television. “They said they’re not going to sell to us. Why? Why?”

“I got in line around 11 p.m., and beyond the line, the plaza was chock full with people,” said Huang Xiantong, 26, from northeastern Liaoning province.

“Around 5 a.m. the crowds in the plaza broke through and the line disappeared entirely. Everyone was fighting, several people were hurt. The police just started hitting people. They were just brawling.”

Police ordered the closure of the store, according to a source close to the situation.

Apple’s latest iPhone, with features including responding to commands with its own voice, was introduced in China and 21 other countries on Friday. Prices ranged from 4,988 to 6,788 yuan ($792 to $1,077).

Apple, in a statement, said its other stores had sold out.

“Unfortunately we were unable to open our store at Sanlitun due to the large crowd and to ensure the safety of our customers and employees, the iPhone will not be available in our retail stores in Beijing and Shanghai for the time being,” it said.

“If people had to make a choice, I think iPhone fans would rather buy an iPhone 4S than go home,” said the blogger, using the online name Zhang Xinchun Daqi.

LEGIONS OF FANS AND SCALPERS

Apple products are wildly popular with Chinese eager to acquire the latest technology first. Many customers in Beijing appeared to be scalpers hoping to scoop up iPhones for resale.

Scalpers are a common sight outside Apple’s stores in China, selling genuine Apple products, usually iPhones, at a markup for customers unwilling to queue or faced with stores out of stock.

At the Sanlitun store, people who appeared to be working on behalf of scalpers were queuing in groups of 50, wearing the same hats or gloves, said Huang, the Liaoning shopper. “The police talked with their leaders,” he said.

Scalpers who ran advertisements online hired thousands of people to stand in line at the Apple stores, offering 100 yuan ($16) per person plus dinner, the Global Times reported.

One organizer surnamed Wei, contacted by the Global Times posing as a job seeker, said he would also pay a 20 percent commission for every additional person brought along.

One scalper in his 40s outside Beijing’s other store in the busy Xidan shopping district, who gave his name as Deng, said he was seeking a markup of 1,000 yuan ($160).

“I think 1,000 is profit enough. If I ask more, people won’t pay,” said Deng, who had queued since 5 p.m. on Thursday. “But actually we’re performing a service for people who don’t want to wait in the cold. People with money don’t care if it costs a little more.”

Apple executives were unavailable to comment on sales, but the company typically does not disclose such figures.

Official resellers continued to sell the new phone. One next to the Xidan store ran out by early afternoon.

Shoppers had mostly left the Sanlitun store by 10 a.m. It remained closed later, ringed by about 50 police at lunchtime.

At one of Shanghai’s three Apple stores, Jin Long, 24, said he had been in line since 2 p.m. on Thursday with the aim of securing a ticket to allow him to buy a new iPhone.

“After waiting all night and getting the card, my relative didn’t bring cash for the transaction and security guards and store workers tore up our tickets,” he told Reuters TV.

“With this kind of attitude, who wants to buy their machines in the future?”