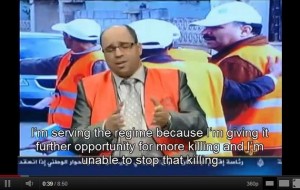 An Arab League observer has left Syria, saying he had witnessed “scenes of horror” he was powerless to prevent and that the Arab monitoring team sent to the country was not acting independently.

“I withdrew because I found myself serving the (Syrian) regime,” Anwar Malek told Al Jazeera television, still wearing the orange vest used by the Arab monitors.

“How was I serving the regime? I was giving the regime a greater chance to continue its killing and I could not prevent that,” the Algerian said in an interview at Al Jazeera’s headquarters in Qatar.

Its task is to verify if Syria is complying with an agreement to halt a crackdown on 10 months of protests against president Bashar al-Assad in which the United Nations says more than 5,000 people have been killed.

Asked why he had quit, Mr Malek said: “The most important thing is to have human feelings of humanity. I spent more than 15 days in Homs… I saw scenes of horror, burnt bodies… I cannot leave behind my humanity in this sort of situation.”

Mr Malek criticised the leader of the Arab League mission, Sudanese General Mohammed al-Dabi, whose suitability for the role had been questioned by human rights groups concerned about his past role in the conflict in Darfur.

“The head of the mission wanted to steer a middle course in order not to anger the (Syrian) authorities or any other side,” said Mr Malek, who had already drawn attention for critical comments he posted on Facebook while still in Syria.

A UN official told the Security Council on Tuesday that Syria had accelerated its killing of protesters after the Arab monitors arrived, the US envoy to the United Nations said.

“The under-secretary-general noted that in the days since the Arab League monitoring mission has been on the ground, an estimated 400 additional people have been killed, an average of 40 a day, a rate much higher than was the case before their deployment,” ambassador Susan Rice told reporters in New York.

Ms Rice was speaking after Lynn Pascoe, UN under-secretary-general for political affairs, briefed the 15-nation Security Council behind closed doors on Syria and other major crises.

She said the figure did not include 26 people the authorities said were killed by a suicide bomber in Damascus last week.

Syria says it is facing a wave of “terrorism” by Islamists, armed and manipulated from abroad, who have killed 2,000 members of the security forces.

Mr Assad said in a speech on Tuesday that his country was the target of a foreign conspiracy.