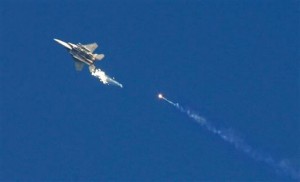 Israeli warplanes dropped an unidentified object in southern Lebanon on Tuesday, Lebanon’s official news agency NNA reported, adding that Lebanese security forces were yet unable to ascertain what the nature of the item.

NNA added that Lebanese security forces are unable to approach the location since the area is littered with unexploded cluster bombs that Israel launched in 2006 during the war with Hezbollah.

According to NNA, the Israel Air Force jets dropped the object in an area between the towns of Houla and Tallouse in south Lebanon.

The incident took place the same day the Israeli military launched drills in the occupied Shebaa Farms and Golan Heights.

Some 75 shells fell on Tuesday in an area of Lebanon near the border with Israel during the military exercise, NNA said.

The shells reportedly exploded near the Shebaa farms