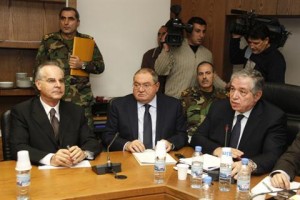 March 14 MP Ziad Qadiri who represents the Future Movement in the parliament said on Monday that Defense Minister Fayez Ghosn did not give clear and straight answers during the parliamentary Defense Commission meeting that can confirm the presence of members of Al-Qaeda militants in Lebanon or not.

“Ghosn’s answers were based on his political affiliation with the Marada Movement and not based on his position as a defense minister,” Qadiri told Future News TV.

The Marada Movement is headed by MP Suleiman Franjieh an ally of Hezbollah and MP Michel Aoun and a close friend of Syrian president Bashar al Assad.

Qadiri also said that the mayor of the Bekaa town of Arsal called him and told him that he received a phone call from army commander General Jean Kahwaji telling him that “the army does not have any information that Al-Qaeda is present in the town.”

Ghosn informed the Lebanese cabinet on December 22 that al-Qaeda members had infiltrated the town of Arsal.

Ghosn said last Tuesday in an interview on OTV in defense of his statements about al Qaeda that the army has “clear information” about the presence of al-Qaeda members in the Bekaa border town of Arsal, noting that “the army raided Arsal in search of Hamza al -Qarqouz,” who is believed to be an al-Qaeda militant who had fled from Syria to Lebanon.

Ghosn added: “It is our duty as politicians and officials to announce that there is an infiltration by some extremists, including al-Qaeda members, through the borders, and it is our duty not to conceal things.”

The Al-Qaeda militant that the Defense Minister referred to in his statements when he talked about the presence of Al Qaeda in the town of Arsal appeared on TV Sunday evening to tell his story.

In an interview with Future TV on Sunday Hamza al -Qarqouz who works as a laborer at a bakery in Arsal expressed regret that his name was raised by the Lebanese defense minister as the Al Qaeda militant from Arsal . Addressed the minister by saying: I am the age of your children ..What will your reaction be like if people told the same type of stories about your son as you told about me ?

Photo: MP Samir Jisr (R ), Defense Minister Fayez Ghosn (C) and MP George Adwan (L) , attend a meeting of the parliamentary Defense Commission at the Parliament in Beirut, Lebanon, Monday, Jan. 9, 2012. Ghosn did not give clear and straight answers during the parliamentary Defense Commission meeting that can confirm the presence of members of Al-Qaeda militants in Lebanon according to MP Ziad Qadiri .