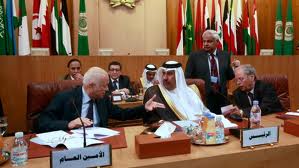 The Arab League repeated its demand Sunday for the Syrian government to immediately stop all violence and allow more monitors in, as activists reported at least 10 more civilians killed by regime forces including two teenagers.

Fierce clashes in the south between government troops and military defectors killed 11 soldiers dead, activists said. The Arab League also called on other armed parties to halt all bloodshed, an apparent reference to the defectors.

The ministerial committee called on “the Syrian government and various armed groups to immediately halt all forms of violence and to return to protesting peacefully for the success of the Arab League observers’ mission in Syria.”

Qatari Foreign Minister Sheik Hamad Bin Jassem Bin Jabr Al Thani said the ministers did not agree to call for U.N. experts to join the observers mission in Syria. But they will ask U.N. experts train the monitors before going in. Even had they called for the U.N. experts to go in, Syria’s regime may well have blocked them.

Five foreign ministers from the 22-member Arab League, who met in Cairo, also said the 165 Arab League monitors already on the ground in Syria need greater independence from the regime.

The monitors are supposed to be ensuring Syrian compliance with a plan to end the government’s crackdown on dissent. The Arab League plan calls on Syria to remove heavy weaponry, such as tanks, from all cities, free all political prisoners and allow in human rights organizations and foreign journalists. Syria agreed to the plan on Dec. 19.

But opposition activists say around 450 people have been killed by President Bashar Assad’s regime since observers began work in Syria nearly two weeks ago. The opposition charges that the regime is misleading the 165 observers and that the mission had done nothing to resolve the crisis.

Arab League Secretary General Nabil Elaraby said observers will continue their monthlong mission in Syria, despite claims by activists that the mission is giving cover to Assad’s crackdown on protesters and delaying further action from being taken.

The Qatari foreign minister told reporters after the meeting that the League is aware that the mission has not fulfilled its goal of stopping the bloodshed.

“Is what happened, ideal? We want to do more,” he said. “We know that the Syrian people have made a decision, but what we want is to lessen the losses, human losses.”

According to the U.N., more than 5,000 people have been killed since March when mostly peaceful anti-government protests began and drew a harsh military response from the government.

The British-based Syrian Observatory for Human Rights said 11 soldiers died in intense fighting in the town of Basr al-Harir in southern Daraa province. More than 20 troops were wounded.

In Homs, seven civilians were killed by troops raiding houses and pro-government snipers on rooftops. A 15-year-old boy was among seven civilians killed, the Observatory said.

The Local Coordination Committees activist network and other activists confirmed the killings of civilians. In the Damascus suburb of Zabadani, two people were killed during raids that followed clashes with defectors, and in the eastern Deir el-Zour province, a 19-year-old was also killed during raids in pursuit of activists, the activists said.

The reports could not be independently confirmed as Syria has barred most foreign journalists from the country and tightly restricts the local media.

At the meeting, the head of the observers issued his first report on the mission, sharing photos, maps and initial findings.

While many of the anti-government protests sweeping the country since March remain peaceful, the Syrian uprising as a whole has become more violent in recent months as frustrated demonstrators take up arms to protect themselves from the steady military assault. An increasing number of army defectors also have launched attacks, killing soldiers and security forces.

The regime’s crackdown has led to broad worldwide condemnation and sanctions, weakened the economy and left President Bashar Assad an international pariah just as he was trying to open up his country and modernize the economy.

The government says that the turmoil in Syria is not an uprising but the work of terrorists and foreign-backed armed gangs.

The Arab League said it needs more monitors in Syria, but did not name an exact number. Initially, the League had requested to send 500 monitors, but so far Syria has allowed in just 165.