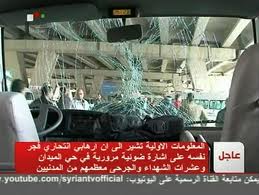 Government officials and media said the unidentified bomber detonated an explosive belt next to buses carrying policemen in Midan, in the south of the capital, just before the weekly anti-regime demonstrations were expected in the area.

But Free Syrian army, colonel Riyadh al-Asaad and the Syrian Local Coordination Committees accused the Syrian regime of president Bashar al Assad of being behind the explosion.

Defense Minister Fayez Ghosn who is reportedly closely associated with the Iranian and Syrian backed Hezbollah and MP Michel Aoun informed the Lebanese cabinet on December 22 that al-Qaeda members had infiltrated the Bekaa town of Arsal near the borders with Syria.

President Assad’s regime which blamed the December 23 rd twin suicide bombing on Al-Qaeda quoted Lebanese officials as warning Syria that Al-Qaeda members infiltrated into Syria from the town of Arsal.

But Interior Minister Marwan Charbel reiterated last Saturday that “there is no organization called Al-Qaeda in Lebanon.” However, he added that there “are people who have been sympathizing with the organization since 2003 following the US occupation of Iraq and after the establishment of fundamentalist movements in Afghanistan and Yemen where Al-Qaeda is present.”

“Al-Qaeda is not present in Lebanon; otherwise the security forces would have uncovered its members ,” Charbel told MTV last Saturday