Lebanese Religious Leaders: Are they Anachronistic?

by Ghassan Karam
1101
by Ghassan Karam The Maronite Patriarch, Al Rai, has demonstrated one more time why is it that men of the cloth should not deal with politics but should confine themselves to their field of expertise , religious guidance
Share: 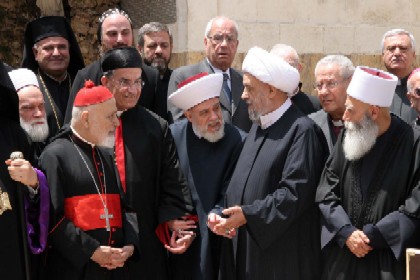 The Maronite Patriarch, Al Rai, has demonstrated one more time why is it that men of the cloth should not deal with politics but should confine themselves to their field of expertise , religious  guidance. The logic in this case is quite simple: a rational person would not seek the advice of a carpenter when an automotive vehicle breaks down neither would one seek the guidance of an electrician when the bathroom sink develops a leak. If the above is true, and I sure hope that it is, then why would I need to listen to the advice of a clergy when the issue is purely political? This matter of separation becomes even more urgent among the Christian clergy whose spiritual master, Jesus Christ, asked them to “Render unto Caesar the things which are Caesar’s, and unto God the things that are God’s”.

That has been the basis for the separation between church and the state and it continues to be. That is why a secular state is a state that does not consider the religious beliefs of its officials, simply their qualifications to do the job in question. But the Christian Maronite Church has different views. Its clergy especially its high rank ecclesiastics seldom perform their religious duties of simply preaching the tenets of their beliefs but instead issue their periodic political analysis and furthermore act as the final arbiters of what is to be enacted or not in the civilian and political realm. The Maronite clergy act more as an unelected Parliament than as men of God. An excellent example of how egregious are the pronouncements of the Maronite Church is best illustrated in the sermon given, on Friday January 6, 2012, by its most senior official, Patriarch Al Rai .

The Patriarch called upon “The Lebanese, Christians and Moslems, to preserve the Lebanese structure which consists of Moslems – Christian’s unity together and that is not built on demographic numbers but on the two cultures of Christianity and Islam. This unity forms the single civilization which is rich in its diversity of customs and beliefs. This Lebanese structure, by maintaining the principal of equal partnership, as per the constitution means a just and equal balance in positions and responsibilities. The cooperative and supportive Christian and Moslem halves form the Lebanese entity.”

A close reading of the above makes it very clear that the speaker, Patriarch Al Rai, has an uncommon understanding of what is democracy, equality or secularism. His only concern seems to provide a rationale for continuing the present unfair and undemocratic structure in Lebanese politics because it treats all people as equal but some as more equal than others.  What does the Patriarch mean when he says that Lebanon is built on the idea of equal partnership between Christians and Moslems and that demography does not count? I for one have always believed, like so many others in this world, that demography is destiny. What is the basis of this equal partnership? Is the Patriarch asking for the protection of individual freedoms and liberties for all or is he asking for equality of seats in the Chamber of deputies and for a guarantee that the President of the Republic will always be a Maronite? When would this equality of elected officials cease to be acceptable? Should the Christians be entitled to 50% of the seats in the parliament when they represent say 20% of the population? Is the strong opposition of the Maronite church for offering the Lebanese citizenship to the Palestinian refugees influenced by this shallow call for “religious balance”?

Any kind of an exchange whether it is between individuals, regions or countries, whether it is in the realm of ideas or physical goods is best when it is based on the principle of knowledge and efficiency , on comparative advantage. It is not difficult to show that people of the cloth do not have much of an advantage in anything in a modern democratic society and so society is bound to be ill served when it heeds the advice of those whose knowledge of the field in question is at best suspect.

The Lebanese have nothing to worry about if they adopt a constitution that protects individual rights and that is implemented. Once we can rise above our narrow tribal religious affiliations to elect the most competent for the job then it should make absolutely no difference whether the official is a Protestant, a Sunni, a Maronite, a Shia or a Durzi. What is important is that the individual in question is a capable, knowledgeable and a competent Lebanese. Nothing else should matter not gender, not racial origin, not sexual orientation and not the colour of one’s eyes. It is time that we ask the heads of the churches and Mosques, to leave the public square and to specialize in that which they can do best, save souls. Unfortunately I do not believe that the clergy, Christian or Moslem, are about to abdicate their political power which borders on being absolute. In the final analysis it is up to each of us to tell the clergy of our churches and mosques that the sacred and the secular are separate issues and that we will not tolerate their interference in civilian life.