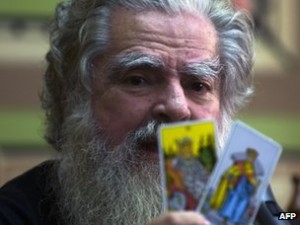 Mexico’s self-appointed grand warlock has predicted that US President Barack Obama will lose the 2012 election and Syria will be invaded .

Antonio Vazquez, who calls himself the “Brujo Mayor”, or grand warlock, leads a Mexican tradition of “brujeria” (sorcery), centered in the south-eastern city of Catemac.

He has been making new year predictions for 25 years, with mixed results.

He also forecast that two more Latin American leaders would be diagnosed with cancer this year.

The grand warlock predicted that Venezuelan President Hugo Chavez, who claims to have beaten an unspecified cancer, would have what he termed a “terrible relapse”.

Speaking at a news conference in Mexico City, Mr Vazquez – who gets his insights from tarot card readings and astrology – put the cancer cases down to “witchcraft” against Latin American leaders.

Of Mr Obama, he said: “I feel Obama will lose. They will attack him a lot. The Republicans have all the money in the United States and so they are putting a lot of pressure on him to make mistakes”.

He also said that Syria would be invaded, although he did not specify by whom.

“I see more problems with Syria than Iraq and Korea. Syria is against the Islamic world and against Europe and the United States. There could be an invasion there or more deaths and deaths and deaths.”

Though he claims an accuracy rate of up to 80%, Mr Vazquez has a mixed success rate.

Last year, he foresaw that the euro would weaken and recession would return to developed economies but he also predicted, incorrectly, that a Latin American leader would be assassinated.

In 2008, he erroneously foretold the death of US singer Britney Spears.