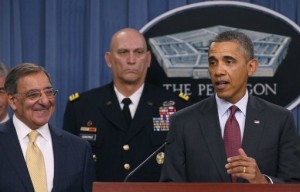 President Barack Obama unveiled a defense strategy on Thursday that would expand the U.S. military presence in Asia but shrink the overall size of the force as the Pentagon seeks to reduce spending by nearly half a trillion dollars after a decade of war.

The strategy, if carried out, would significantly reshape the world’s largest military from the one that executed President George W. Bush’s “war on terrorism” in Iraq and Afghanistan.

Cyberwarfare and unmanned drones would continue to grow in priority, as would countering attempts by China and Iran to block U.S. power projection capabilities in areas like the South China Sea and the Strait of Hormuz.

But the size of the U.S. Army and Marines Corps would shrink. So too might the U.S. nuclear arsenal and the U.S. military footprint in Europe.

Troop- and time-intensive counter-insurgency operations, a staple of U.S. military strategy since the 2007 “surge” of extra troops to Iraq, would be far more limited, with the force no longer sized for large-scale, long-term missions.

“The tide of war is receding but the question that this strategy answers is what kind of military will we need long after the wars of the last decade are over,” Obama told a Pentagon news conference alongside Defense Secretary Leon Panetta.

Panetta said the new strategy would mean the Pentagon would field a “smaller and leaner” military force but said the exact number of personnel would not be determined until the Defense Department finishes its proposed 2013 budget in the coming weeks.

Administration officials have said they expect Army and Marine Corp personnel levels to be reduced by 10 percent to 15 percent over the next decade as part of the reductions.

Critics already are charging that the cuts are being driven by budget woes rather than U.S. defense needs but Obama and Panetta emphasized that the reverse is true. They did not divulge details of spending and cuts, which will be detailed in Obama’s upcoming federal budget for fiscal year 2013.

“Some will no doubt say the spending reductions are too big; others will say they’re too small,” Obama said.

He emphasized that even after enactment of the $487 billion in reductions agreed with Congress in August, the defense budget would still be larger than it was toward the end of Bush’s administration.

“Over the past 10 years, since 9/11, our defense budget grew at an extraordinary pace,” Obama said. “Over the next 10 years, the growth in the defense budget will slow but the fact of the matter is this – it will still grow because we have global responsibilities that demand our leadership.”

The shift in focus to Asia comes amid increasing concern at the Pentagon over China’s strategic goals as it begins to field a new generation of weapons that American officials fear are designed to prevent U.S. naval and air forces from projecting power into the Far East.

“We will be strengthening our presence in the Asia-Pacific,” Obama said, “and budget reductions will not come at the expense of that critical region.”

The new strategy calls for the U.S. military to “rebalance toward the Asia-Pacific region” even as it continues to actively counter the threat of violent extremism.

It also calls for increased investment in cyber capabilities and suggests the United States may be able to shrink its nuclear arsenal further without jeopardizing security.

The strategy says the United States should maintain a force that can win one major war while still being able to deter an aggressor in a second conflict. In the past the Pentagon has tried to field a force that could fight and win two major wars at once.

Panetta played down the differences, saying the earlier strategy dealt with large conflicts of the past while the current strategy was considering the conflicts the United States is likely to face in the 21st century.

“Make no mistake – we will have the capability to confront and defeat more than one adversary at a time,” he said.

NEW PLAN AFTER DECADE OF GROWTH

Obama initiated the strategic review last summer after asking the Pentagon to begin planning for major cuts to the U.S. defense budget after a decade of growth.

The strategy document released on Thursday addressed U.S. interests in broad brush-strokes but did not get into specifics about how many troops would be reduced or deal with specific budgetary issues.

Panetta acknowledged that the cuts would require difficult choices.

“There is no question that we have to make some tradeoffs and that we will be taking on … some level of additional but acceptable risk in the budget plan we release next month,” he said. “These were not easy choices.”

The strategy underscores the United States’ “enduring interests” in Europe and the importance of the North Atlantic Treaty Organization but says the force posture in Europe must “evolve” with the changing times, opening the door for troop reductions.

Administration officials have said the United States is likely to further reduce the number of ground forces in Europe by another combat brigade, a unit of 3,000 to 4,000 people depending on its composition.

The strategy document underscores a U.S. interest in maintaining stability in the Middle East while responding to the aspirations of the people as expressed in the Arab Awakening last year. It also says the United States will continue working to halt nuclear programs in Iran and North Korea.

“U.S. policy will emphasize Gulf security, in collaboration with the Gulf Cooperation Council countries when appropriate, to prevent Iran’s development of a nuclear weapon capability and counter its destabilizing policies,” it says.

The document expresses concern about new weapons being developed by China and Iran that could make it difficult for the U.S. Navy and Air Force to project power abroad.

“The United States must maintain its ability to project power in areas where our access and freedom to operate are challenged,” it says.