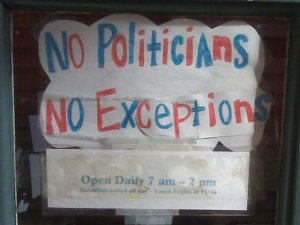 PORTSMOUTH, N.H. – New Hampshire is flooded this week with politicians, their campaign staffs and the media that’s following them.

It’s as if they’ve taken over the state until the Jan. 10 presidential primary.

But they’re no longer welcome in one restaurant.

Colby’s Breakfast & Lunch in Portsmouth is so sick of White House “wannabes” they’ve put up a sign out front that reads “No Politicians, No Exceptions.”

“We had some disturbances with politicians coming in and tying up the dining room, slowing down and spreading their agenda and just interrupting our clienteles’ breakfast and disrupting the atmosphere,” a waiter named Andrew told WBZ NewsRadio 1030.

“This has happened 5 or 6 times since the summer and we’re kinda fed up with it.”

The ban apparently extends to the media too.

The cook asked this reporter not to talk to customers Thursday.