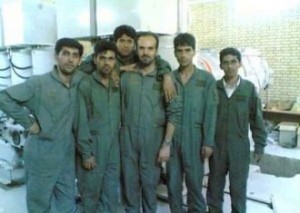 Syrian rebels insist that Iranian mercenaries are trying to help the Syrian regime in the suppression of the uprising. A brigade of the “Free Army” had taken five Iranian hostage, said Colonel Abd al-Razaq Tlass, one of the commanders of the rebels in the city of Homs.

The rebels have shown a German reporter the Iranian passports and identity cards. They were dressed as civilians, but were taken up in a combat zone, said Tlass. According to him, the five were also appear in images wearing military uniforms. The Syrian rebels claim these five Iranians are actually officers in the Iranian Revolutionary Guard.

The Iranian embassy in Damascus announced last month that the five Iranians were technicians working in a power plant in Syria. Iran’s Foreign Ministry spokesman Ramin Mehmanparast on Wednesday called for their release, saying “according to the latest information we have…they are in good health.”

On Tuesday, an unknown group calling itself “The Movement against Shiite tide in Syria” claimed responsibility for kidnapping the five Iranians, adding “we take upon ourselves the task of detecting and hit all the forms of support provided by both Iran and Hizbullah to the offender.” The statement said that the kidnapping is a “first warning to Iran and Hizbullah for their continued support of the Syrian regime in suppressing the revolt.”