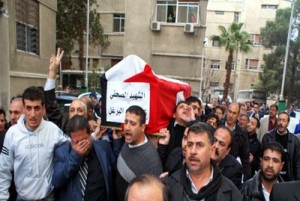 A Syrian journalist has died after being shot in the head, shortly after the troubled Middle East country was highlighted as one of the ten most dangerous places for reporters by media watchdog Reporters Without Borders (RSF).

Fifty-five year old Shukri Ahmad Ratib Abu Burghul died on 2 January in a Damascus hospital after sustaining a gunshot wound to his head.

“Gunmen deliberately shot Burghul in the face, beneath the eye,” after returning home from his weekly radio show, said the Paris-based RSF organisation.

Foreign journalists are mostly banned from Syria, and local media outlets are working under severe restrictions. Citizen journalism is relied upon for updates of the ongoing uprising against the government, which began in March 2011.

The United Nations now estimates that over 5,000 people, mainly civilians, have been killed since the start of the uprising.

The Arab Spring has certainly taken its toll on the media, with double the number of journalists’ deaths in the Middle East in 2011 compared with 2010.

A total of 20 reporters lost their lives reporting from the Arab world last year, according to Reporters Without Borders, which also stressed the same number of journalists lost their lives in Latin America in 2011, where they are often “exposed to the threat of criminal violence”.

Worldwide, 66 journalists were killed last year – up 16% on the previous year – with 1,959 reporters physically harmed or threatened, and a further 1,044 arrested.