Geagea predicts the fall of Assad regime in 2012 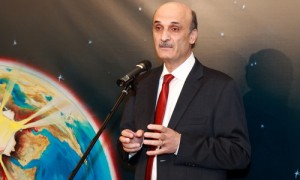 During a gathering of his party’s general committee in Meerab he said :

“Following the fall of the Syrian regime, we will enter a well defined political process of building relations between Lebanon and Syria as two independent and sovereign states and end Syrian interference in this country.”

“The year 2012 will witness the fall of the Syrian regime. This will have a significant impact on Lebanon’s situation and will result in a new balance of power formula ,” Geagea added

He also said that the fate of the Lebanese prisoners in Syrian jails will be revealed once the Syrian regime is overthrown.

Geagea condemned the killing of the three Lebanese nationals by Syrian gunfire in the region of Wadi Khaled last week, lamenting the Lebanese government’s lack of position on the matter.

“It should have very clearly condemned the incident, launched investigations, and demanded immediate clarifications from the Syrian government,” he stressed

Commenting on allegations that al-Qaeda members had infiltrated Lebanon, he said: “This is the first time that ministers are determined to tarnish the image of their country.”

“Are they making such statements so that we go and combat the extremists? This is their job,” he stressed

Measures should be taken against the ministers who made the allegations, he stressed

Last week, Lebanon’s Defense Minister Fayez Ghosn warned of the presence of Al-Qaeda cells in Arsal, near the Syrian border.

On saturday Interior Minister Marwan Charbel reiterated that “there is no organization called Al-Qaeda in Lebanon.” However, he added that there “are people who have been sympathizing with the organization since 2003 following the US occupation of Iraq and after the establishment of fundamentalist movements in Afghanistan and Yemen where Al-Qaeda is present.”

“Al-Qaeda is not present in Lebanon; otherwise the security forces would have uncovered its members ,” Charbel told MTV on Saturday