19 killed in new Syria clashes, despite presence of AL observers 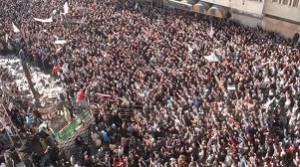 At least 19 people have died as hundreds of thousands of Syrians poured into the streets in the largest protests in months, activists said.

Despite the presence of Arab observers, the activists said security forces opened fire on protesters.

Rami Abdul-Raham, who heads the British-based Syrian Observatory for Human Rights, said the crowds were largest in Idlib and Hama provinces, with 250,000 people each.

Other massive rallies were held in Daraa province and the Damascus suburb of Douma.

The continuing violence in Syria, and new questions about the human rights record of the head of the Arab League monitors, are reinforcing the opposition’s view that Syria’s limited co-operation with the observers is nothing more than a ploy by President Bashar Assad’s regime to buy time and stall more international condemnation and sanctions.

There is broad concern about whether Arab League member states, with some of the world’s poorest human rights records, were fit for the mission to monitor compliance with a plan to end the crackdown on political opponents by security forces.

The United Nations says some 5,000 people have been killed in the government campaign since March.

Despite scepticism over the Arab League mission, it has energised the protest movement, with tens of thousands turning out this week in cities and neighbourhoods where the observers are expected to visit.

However the huge rallies have been met by lethal gunfire from security forces, apparently worried about multiple mass sit-ins modelled after Cairo’s Tahrir Square.

In general, activists say, security forces have launched attacks when observers were not present. But there have been some reports of firing on protesters while the monitors were close by.