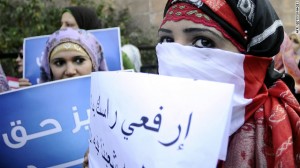 An Egyptian administrative court issued an order Tuesday banning virginity tests for female detainees, months after several women alleged they were subjected to such examinations following a March protest in Cairo’s Tahrir Square.

The ruling comes in the case of Samira Ibrahim, a 25-year-old marketing manager who took the country’s military led-government to court in August, alleging she was among those subjected to the test after her arrest during the March 9 protest. She said she faced death threats after bringing the case.

“Justice has been served today,” Ibrahim told CNN. “These tests are a crime and also do not comply with the constitution, which states equality between men and woman. I will not give up my rights as a woman or a human being.”

Aly Hassan, a judicial consultant affiliated with Ministry of Justice, said the order only affects the use of such tests in military prisons and on women in temporary detention.

“Those tests are not considered a crime or else the file would be in the Criminal Court,” Hassan said. “It’s the circumstances of the alleged test that may be in question here.”

In March, the human rights group Amnesty International reported that Egyptian troops beat, shocked and strip-searched women arrested during the protest in Cairo and forced them to submit to virginity tests.

Egyptian authorities initially denied requiring virginity tests, but in May, a senior general who asked not to be identified acknowledged the practice.

The general said the tests were performed as a safeguard against the women accusing authorities of sexual assault, and he defended the tests.

“The girls who were detained were not like your daughter or mine,” the general told CNN at the time. “These were girls who had camped out in tents with male protesters in Tahrir Square, and we found in the tents Molotov cocktails and (drugs).”

But Ibrahim said her treatment clearly showed the tests were meant to “degrade the protesters.”

“The military tortured me, labeled me a prostitute and humiliated me by forcing on me a virginity test conducted by a male doctor where my body was fully exposed while military soldiers watched,” she said.

Another protester arrested in the March 9 protest, Salwa Hosseini, offered a similar account, according to an Amnesty International report on the allegations.

In addition to Ibrahim, a member of the No to Military Trials to Civilians group, Maha Mamoun, joined the legal action even though she was not subjected to a test, said Ahmed Ragab, an attorney with the Hisham Mubarak Law Center who handled Ibrahim’s case.

Ragab said government lawyers initially denied that the tests were administered and the case was repeatedly delayed before Tuesday’s ruling.