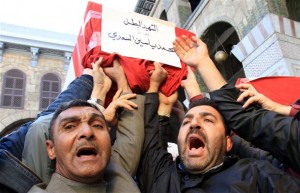 Heavy gunfire killed at least 20 people in Syria’s besieged city of Homs on Monday as opposition groups urged Arab League observers to head there immediately after they arrive in the country.

An initial group of 50 observers were due to land in Syria later on Monday to oversee a deal aimed at ending a bloody crackdown on dissent, which has showed no signs of abating.

‘The situation (in Homs) is frightening and the shelling is the most intense of the last three days,’ the Britain-based Syrian Observatory for Human Rights said in a statement received by AFP in Nicosia on Monday.

‘The rounds fired from heavy machineguns in the Baba Amro district of Homs caused 13 deaths on Monday morning and dozens of injuries.’

But activists told Deutsche Presse Agentur that at least 18 people had been killed and 40 injured when Syrian forces fired more than 100 mortar shells at the city.

‘The death toll since the morning has reached 18. It is expected to increase as most of the wounded are in critical condition,’ Omar Homsi told DPA by phone.

On Sunday, the opposition Syrian National Council (SNC) said Homs is under siege and facing an ‘invasion’ from about 4000 troops deployed near the central city that has become a focal point of the nine-month uprising against President Bashar-al Assad’s regime.

‘The observers must head immediately to the martyrs’ district of Baba Amro to stop the assassinations and meet with the Syrian people so that they witness the crimes being perpetrated by the Syrian regime’ the observatory said in its Monday statement. 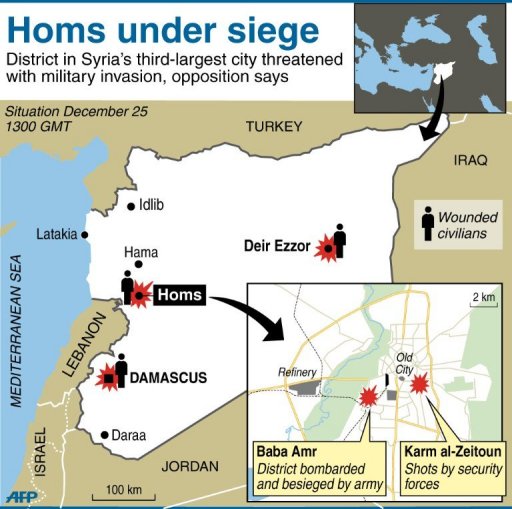 A nine-member advance team of Arab monitors arrived on Thursday to pave the way for the observer mission to oversee the deal aimed at ending the crackdown, which the UN estimates has killed more than 5000 people since March.

Syrian opposition groups have said the observers must stop their work if they are blocked by the authorities from travelling to protest hotspots like Homs.

‘We hold the Arab League and the international community accountable for the massacres and bloodshed committed by the regime in Syria,’ the SNC said on Sunday.

In a meeting with AFP at his Khartoum mansion last week, the 63-year-old Dabi distributed a curriculum vitae that outlined a hardcore military background, including three years as chief of military operations against the insurgency in what is now South Sudan.

Foreign Minister Walid Muallem has said he expects the Arab League observers to vindicate his government’s contention that the violence is the work of ‘armed terrorists.’

Opposition leaders charge that Syria agreed to the mission after weeks of prevarication in a ‘ploy’ to head off a threat by the 22-member league to go to the UN Security Council over the crackdown.

The observer mission will eventually number between 150 and 200, according to Arab League officials.

The mission is part of an Arab plan endorsed by Syria on November 2 that calls for the withdrawal of the military from towns and residential districts, a halt to violence against civilians and the release of detainees.

But since signing the agreement, the Assad regime has been accused of intensifying its crackdown.

The SNC and human rights activists have charged that the Syrian government was behind twin suicide bombings in Damascus on Friday that killed 44 people.

Assad’s regime has blamed the attacks on ‘terrorist organisations’, including al-Qaeda, although it has not said how it reached the conclusion.

Violence continued through the weekend, with security forces pounding Baba Amr with mortar and heavy machinegun fire on Sunday, killing an undetermined number of people and wounding 124, according to the Observatory.

The group said 26 people were arrested and tortured in public in nearby Rastan, and that one civilian was killed by security forces in eastern Deir Ezzor province and reported five civilians shot and wounded in the Sitt Zeinab neighbourhood of the capital.