by yalibnan
1057
Two car bombs rocked the Syrian capital Damascus on Friday; the al-Assad regime immediately rushed to announce that Al Qaeda was responsible for this terrorist operation,
Share:

Two car bombs rocked the Syrian capital Damascus on Friday; the al-Assad regime immediately rushed to announce that Al Qaeda was responsible for this terrorist operation, which coincided with the arrival of the delegation of Arab monitors to Syria, who hurried the al-Assad regime to take them to the site of the twin explosions. Is this a soap opera orchestrated by the regime, or have Al Qaeda decided to support al-Assad?

What is strange is that last Thursday – one day before the Damascus bombings – Washington announced that it was offering a reward of up to $10 million for the capture of the man who is allegedly Al Qaeda’s biggest financier today, a Syrian national living in Iran, the country that is supporting Bashar al-Assad, both publicly and in secret. As for evidence of this [support], it is enough to recall that there are 5 kidnapped Iranians in Syria today; the Syrian opposition claim they are [Iranian] snipers. After all this, how can the al-Assad regime claim that Al Qaeda is behind the Damascus bombings! There are a number of questions that must be raised here, and these are justified questions that every rational person must ask, such as: why did Al Qaeda not carry out any terrorist operations in Syria until the day that the Arab monitors arrived in Damascus? How could Al Qaeda even reach the sites where these explosions took place in Damascus, particularly as the Syrian capital is divided into a number of security districts, and no demonstrations can take place there for fear of the worst suppression? In which case, how did Al Qaeda manage to infiltrate the Syrian capital so easily?

Someone might ask: where is Al Qaeda’s statement claiming responsibility for the Damascus operations? And what about the al-Assad regime’s claims that it received warnings from Lebanon regarding Al Qaeda’s movements in Syria?

To address the last two points here, we need only to ask our readers to stimulate their memory and recall the story of [Ahmed Tayseer] Abu Adas, with all of its details and deceptions [Abu Adas falsely claimed responsibility for the assassination of Rafik Hariri on behalf of the previously unknown jihadist outfit, the Group for Advocacy and Holy War in the Levant]. This story was put forward on the day of the assassination of former Lebanese Prime Minister Rafik Hariri, and perhaps the sole difference in the statement – or shall we say story – of Abu Adas and what happened last Friday in Damascus, is that there are no longer many in the Arab media who – consciously or unconsciously – embrace such deceptions, for a word to the wise is enough! Therefore, if the most wanted Al Qaeda figure today is the Syrian, Ezedin Abdel Aziz Khalil, who is present in Iran, and who is in charge of Al Qaeda operations there, how could Al Qaeda target the al-Assad regime and its Shabiha [militia] forces?

This is not believable, particularly as the process of sending suicide bombers to Iraq was a purely Syrian game. This can even be seen in the quotes published by one of the Iranian media outlets and attributed to Syrian President Bashar al-Assad, in which he threatened Turkish Foreign Minister [Ahmet Davutoglu] about the Syrian regime’s capability of setting fire to the entire region. At the time, this Iranian media outlet quoted a source as saying that the al-Assad regime had facilitated the overthrowing of the Saddam Hussein regime for the US, and then taught them a lesion via the [suicide] operations that took place in Iraq. Indeed, it is enough to recall that former US President George W. Bush targeted sites inside Syria that suicide bombers were using to infiltrate Iraq, as well as sites located on the Syrian – Iraq border! 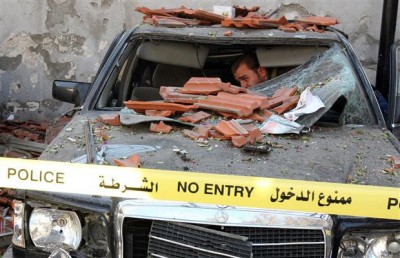 Therefore, either the recent Damascus bombings is nothing more than a farcical soap operate orchestrated by the al-Assad regime – which represents one of its tricks that has been exposed – or Al Qaeda is now supporting the Bashar al-Assad regime. Both possibilities lead to the same destination, namely that the al-Assad regime, which politically speaking is a dead man walking, is trying to extend its life in any way, shape or form, even by turning to Al Qaeda.

(The writer is the Editor-in-Chief of Asharq al-Awsat. This article was first published in the London-based newspaper on Dec. 25, 2011)