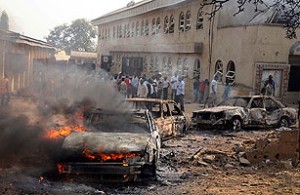 Nigeria’s Christmas from hell began around 7.30 a.m at St. Theresa’s church in Madalla, a suburb of the capital Abuja, just as worshipers spilled outside from the popular service. “A man with a motorbike dropped a bag just outside the church,” a member of St. Theresa’s told TIME. “One of our officials went to check what was in the bag and at the same time he reached it, that was when there was an explosion. Everybody started running. You can imagine how many people were running around. We thought the explosion was from one car that was parked outside but we now discover it was actually the bag that my colleague, went to check.” The blast partially destroyed the church roof and shattered glass in nearby buildings. It turned out to be only part of a wave of bomb blasts striking packed churches and towns across Nigeria as Islamist militants launched a Christmas day spree that left at least 39 dead and scores more wounded in Africa’s most populous nation.

“With my own two eyes I saw a whole family, five of them, perish in their car which was next to the explosion,” Idriss, 43, a truck driver told TIME over the phone. “I counted 27 bodies. Not only in the church, outside there were two drivers dead on top of their okadas [the local motorcycles used to navigate the area’s choked streets].” Among the dead were three policemen stationed to guard the church, the police area commander told TIME. Security has been beefed up in churches nationwide amid repeated threats from the Islamist militant group Boko Haram.

Angry Christian youths, furious over the attack, initially refused to let the dead bodies be cleared away from the smoldering rubble, demanding that President Goodluck Jonathan personally see what had taken place. Officials from the National Emergency Management Agency struggled with a shortage of ambulances. Policemen eventually cordoned off the area and dispersed the mob by reportedly firing live rounds into the air.

It was not the first bombing in the capital region. Boko Haram members allegedly detonated Nigeria’s first ever suicide bombing in August at the United Nations compound, killing 24. The group, which draws inspiration from Afghanistan’s Taliban movement, is fighting for a strict interpretation of Shari’a law across Nigeria’s 160-million strong population, which is roughly split between Muslim and Christian. Boko Haram (which roughly means “Non-Islamic education is forbidden” in Hausa, a language in northern Nigeria) is believed to have been behind four subsequent explosions.

On Christmas day, a person claiming to speak on behalf of Boko Haram claimed responsibility for the Madalla church attack and another attempted explosion that struck the central city of Jos — an ethnic and religious melting pot that has borne the brunt of Nigeria’s sectarian violence. “A police patrol car sighted three men on a motorbike. There was exchange of gunfire and the men threw the bomb into the church compound,” a Jos state official said, speaking on condition of anonymity. He said the policeman died on the way to hospital but no other casualties were reported. In Jos, traditional celebrations and planned family reunions had already been scrapped in the runup to Christmas amid painful memories of a Christmas eve bomb that killed some 32 people last year, residents said. “The streets are so empty it’s like it’s not even Christmas. Nobody wants to go out even to buy cigarettes because of all this fear,” said Chidi Emweku, 31, a university student.

Meanwhile explosions struck two other towns in Yobe, one of the impoverished north eastern states where Boko Haram traditionally operates. One was in a church in Damaturu, according to residents. The police commissioner said details were not immediately available.

Earlier in the week, Chief of Army Staff, Azubuike Ihejirika, said three soldiers were killed when police raided a suspected Boko Haram bomb-making factory in Damaturu. “There was a major encounter with the Boko Haram in Damaturu,” Ihejirika said. “In the encounter, we lost three of our soldiers, seven were wounded. But we killed over 50 of their members.” Hospital and morgue workers who spoke to TIME said almost all the 50 bodies they saw were civilians. Critics say the army’s frequent incursions into areas where Boko Haram has popular support has fueled the cycle of violence. The group’s fierce anti-government rethoric has also earned it support in the arid predominantly Muslim northeastern states of Yobe and Borno, where unemployment and poverty far exceed that in the oil-rich, south, where Christians abound.

Experts are anxiously monitoring Boko Haram’s ability to strike regularly beyond Yobe and Borno, amid claims from the group that they have traveled to neighboring Chad and as far east as Somalia for training and financing. A December 2011 report from the U.S. Congress said the organization — along with Al-Qaeda in the Islamic Maghreb, which operates just north of Nigeria’s Sahel desert — posed a growing threat to American interests.

Activist Shehu Sani, president of Civil Rights Congress of Nigeria, said several attempts to broker a ceasefire between the group and the government collapsed amid mutual mistrust. “The only option is dialogue. For as long as the group has foot soldiers willing to use their bodies, using force will not work against them,” he said. The violence prompted condemnations from around the world including a statement from the White House which called the attacks “senseless” and pledged to work with Nigerian officials to bring those responsible to justice.

President Jonathan said there was “no reason” for what he called “an ugly incident.” “This is one of the challenges of this administration. This will not be for ever it will end one day,” he said in a statement. But many Nigerians wonder when it will end. Idriss, standing amid the wreckage in Madalla, said he had fled Jos earlier in the week after news filtered the country of day after day of gun battles in the north of the country. “I just wanted to be somewhere safe, but look what happened,” he said, as sirens wailed in the background.

Photo: A car burns at the scene of a bomb explosion at St. Theresa Catholic Church at Madalla, Suleja, just outside Nigeria’s capital Abuja, December 25, 2011