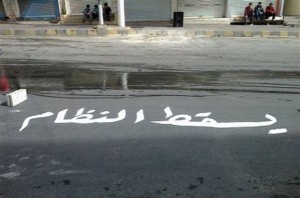 The Canadian federal government has ordered Canadian banks to freeze any assets they hold for Syrian President Bashar al-Assad’s regime even as it anticipates the tyrant’s downfall.

Foreign Affairs Minister John Baird announced the requirement, dismissing Syrian government claims that al-Qaeda was responsible for two suicide attacks in the country. “Canada will continue to put the squeeze on the Assad regime,” he said. “We will not sit idly by, not while Assad and his thugs continue to violate the rights of the Syrian people.”

However, Baird could not say how much money and property Canadian banks were holding for the 33 senior Syrian government and military officials and 10 primarily state-run companies affected by the asset freeze. “The financial institutions will be required immediately to review their accounts to find out how much is available and the RCMP will work with that. Until those reviews have taken place, we can’t say to what extent their assets are here.”

In addition to the asset freeze, Baird said Canada will prohibit all imports from Syria, with the exception of food. Nor will Canadian companies be allowed to make any new investments in the country or export equipment, including software for the monitoring of telephone and Internet communications.

“Assad is cut off. His disgusting brand of violence must stop and come to an end, he must go,” the minister said, reiterating the government’s call for all Canadians still in Syria to leave by any means necessary. “The Syrian people have endured a violent repression of their calls for basic freedoms and the rights that are essential to human dignity.”

This new round of sanctions is the fourth imposed by the federal government since May in response to the Assad regime’s crackdown on opponents.

Baird’s rhetoric appeared to please members of the Syrian National Council (SNC) opposition movement who were in Ottawa Friday to meet with the minister and Foreign Affairs officials. The organization, which claims to represent all the main factions opposed to Assad, wants Canada to take the lead in encouraging other western governments to recognize the SNC as the legitimate representative of the Syrian people.

Ahmad Ramadan, a member of the SNC executive committee, described the meeting with Baird and his bureaucrats as “very successful, very constructive.”

In a later interview he noted that the fact Baird was willing to meeting formally with the SNC is a de facto recognition of the organization’s legitimacy. But Ramadan also said the purpose of the meeting was not only to gain recognition for the SNC, but also to discuss what role Canada might play in aiding the transition to a post-Assad Syria, particularly in regard to ensuring stability in the country.

SNC delegates asked Baird to withdraw Canada’s diplomatic mission from Damascus as a way to further delegitimize the Assad regime and, according to Ramadan, were told “it would happen soon.”

The SNC wants the international community to establish safe havens within Syria where protesters and those opposed to the Assad regime can be safe. “We asked the Canadian government to help convince some countries, some governments in the UN Security Council to bring forward a resolution that will help in the protection of civilians in Syria,” said SNC representative Obaida Nahhas.

Baird shied away, however, from questions about possible Canadian and international military involvement in Syria.

The United Nations says more than 5,000 people have died since mass protests against Assad erupted in March. The violence continued on Friday with reports of two suicide bomb attacks on security service bases in the Damascus, which killed 44 people and injured 166 others. They were the first suicide bombings in the country since the uprising began, and the first against the powerful security services in the heart of the capital.

Syrian authorities blamed al-Qaida for the attacks, which came a day after the arrival of an advance team making preparations for Arab League observers to oversee a plan to end the violence.

The Syrian government claims that more than 2,000 security force personnel have been killed in attacks by armed rebels since March, but the regime’s behaviour has received considerable condemnation from both Arab and Western countries. So far, though, the UN Security Council has failed to agree on any formal resolution on Syria.

Baird, meanwhile, questioned the credibility of claims that al-Qaeda was behind Friday’s bombings, citing previous Assad denials that any violence was taking place within the country. “If it wasn’t so serious it would almost be comical,” he said.

The minister predicted that Assad’s regime would fall sooner or later. “Assad will fall, the government will fall, it’s only a matter of time.”

Baird voiced support for the SNC, saying it had made progress in establishing its credibility as a possible partner as Canada and its allies push for Assad and his government to step aside. However, he stopped short of fully endorsing it.

Nonetheless, Ramadan said the minister had reassured them such recognition was on the horizon, but that their lack of a presence on the ground in Syria was a key stumbling block. “We have been told that it is coming,” he said. “Mr. Baird told me they will be working on this.”

The SNC representatives met later at Carleton University with members of the Syrian Canadian Council to brief them on what has been taking place in the country and to outline the SNC efforts to establish itself as legitimate political alternative to the Assad regime. About 25 people attended the meeting.

The SNC representatives acknowledged that nine months ago, few could have imagined Assad’s regime would be on the brink of collapse. Now, though, as Ramadan put it, “Assad has lost all legitimacy, domestically and internationally. He is going to fall.”

Asked whether a post-Assad Syrian government would end hostilities with Israel and sign a peace accord with the Jewish state, Ramadan equivocated. “The new Syria will be a true factor for stability in the region, particularly with its neighbours.

“The new Syria will demand the return of the territories under Israel occupation,” he added in reference to the Golan Heights.