GCC tells Iran to ‘stop meddling in its internal affairs 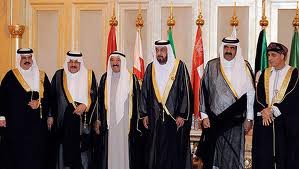 The six-nation Gulf Cooperation Council called on arch rival Iran on Tuesday to stop meddling in the internal affairs of the group’s members.

“Stop these policies and practices … and stop interfering in the internal affairs” of the Gulf nations, said a statement released at the end of the GCC annual summit in the Saudi capital Riyadh.

The GCC also called on Iran to “fully cooperate” with the International Atomic Energy Agency and work to resolve regional conflicts “peacefully,” adding that the GCC nations were still committed to a Middle East “free of weapons of mass destruction.”

Saudi-Iranian relations have deteriorated since 1,000 Gulf troops entered the tiny kingdom of Bahrain to help the Sunni monarchy there crush a Shiite-led uprising in February and March.

The already tense Saudi-Iranian relations took a turn for the worse when U.S. justice officials announced in October that they had foiled an Iranian plot to assassinate the Saudi ambassador to Washington.

Though the Iranian intelligence chief was in Riyadh last week to clear up “misunderstandings” regarding the alleged assassination plot, tensions between the two nations remain high.

On Monday, the last of American troops withdrew from Shiite-dominated Iraq, further heightening Gulf concerns over growing Iranian and Shiite influence in the region.

Rulers of the Gulf Cooperation Council urged Baghdad to step up its efforts to normalize ties with its neighbor Kuwait, 10 years after the Gulf War.

They also expressed support for a Kuwaiti port project disputed by Baghdad.

The Gulf Arab nations, with the exception of Bahrain, for the most part evaded the uprisings of the Arab Spring.

One the Issue of Syria, the foreign minister of Saudi Arabia, which dominates the six-member GCC, said Damascus must embrace all of the Arab league plan it has signed, which calls for pulling troops from population centers, releasing prisoners and dialogue with opposition forces.

“If the intentions are pure, these steps must be taken immediately,” Saudi Foreign Minister Prince Saud al-Faisal said in response to a question about Syria’s signing of the plan from the Arab League, which has also imposed sanctions on Damascus.

The GCC appealed for Damascus to “put an end to bloodshed, lift all signs of armed conflict and release prisoners, as a first step towards implementing the (Arab) protocol.”

Syrian Deputy Foreign Minister Faisal al-Maqdad signed the accord on Monday after weeks of prevarication in the hope that now the Arab League will lift sweeping sanctions against the regime.

The plan, endorsed by Syria on November 2, also calls for a complete halt to the violence, releasing detainees and the complete withdrawal of the military from towns and residential districts.

“The higher council agreed to set up a Gulf development fund, which starts with offering support for development projects in the Hashemite Kingdom of Jordan and the Kingdom of Morocco, to the value of $2.5 billion each,” the final communiqué said.

Gulf Arab countries said in September they plan to fund a five-year development aid program for Morocco and Jordan, and the amount will be set in December.

The Gulf monarchies are seeking closer ties with Arab kingdoms outside the Gulf as part of efforts to contain pro-democracy unrest that is buffeting autocratic ruling elites throughout the Arab world, analysts say. Jordan and Morocco are the only two Arab states outside the Gulf with monarchies.

The United Arab Emirates said last month there was no consensus yet among Gulf Arab states on admitting Jordan and Morocco to the GCC.