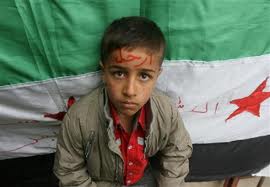 The Syrian government has signed an agreement to let international monitors into the country, finally accepting the last requirement of an Arab League deal to end the violence wracking Syria

Syrian Deputy Foreign Minister Faisal Mekdad signed the agreement at the Arab League headquarters in Cairo on Monday, according to both a Reuters witness and an Arab League diplomat speaking on condition of anonymity, reports Haaretz.

The Associated Press writes that Syria likely agreed to Arab League proposal to avoid UN involvement in the country’s upheaval, though regime critics argue that it is only a delaying tactic by President Bashar al-Assad while Syrian forces attempt to crush anti-government resistance.

Syria had previously agreed to the plan, which includes withdrawal of its army from Syrian towns and cities, the release of thousands of political prisoners, and opening dialogue with the opposition. But Damascus subsequently balked on terms requiring Syria to open its borders to Arab League monitors, and instead continued to attack protesters. The UN last week estimated that at least 5,000 people have now been killed during the upheaval, which began in March.

As a result of Syrian recalcitrance, Arab League officials implemented sanctions against Syria last month. They were set to meet on Wednesday to discuss a proposal that the UN take action against Syria.

Bloomberg writes that Syrian Foreign Minister Walid al-Moallem said that Syria agreed to sign the deal after Arab League officials changed the original text of the document as Syria requested. “If our amendments were not included, we wouldn’t have signed,” he said. “The signing of the protocol is the beginning of cooperation with the Arab League and we will welcome the observers.” Mr. Moallem did not discuss the details of the agreements.

As the terms of the deal were being discussed in Cairo, hundreds of people held a pro-government rally in Damascus, expressing support for the Assad regime and countries that have opposed intervention in the Syrian crackdown. Agence France-Presse reports that huge Russian and Chinese flags, as well as the colors of Syrian regional allies Iran and Hezbollah, decorated office buildings in Sabaa Bahrat Square, where the rally was held.

“Hail to Russia, hail to China,” a rally organiser chanted over a loud-hailer, saluting the two veto-wielding UN Security Council permanent members’ blocking of an October resolution that would have threatened regime figures with “targeted measures”. …

State television gave prominent coverage to the rally, hailing the young demonstrators’ desire to “express their support for the reforms being undertaken by President Assad and their rejection of foreign interference.”

Elsewhere in Syria, the conflict showed little sign of ending. The Daily Telegraph writes that armed rebels in the flashpoint city of Homs, including soldiers who have defected, have warned that they will seek retribution if government forces execute 21 rebels they captured. The Syrian Army says that it has learned that the captured rebels, believed to have been seized during an attack on government posts in Deraa earlier this month, are scheduled to be executed sometime today.

“I have a personal message for the Army: If the Army executes these men, there will be a very harsh retaliation against them here in Homs,” Abdul-Razaq Tlas, commander of one of two rebel battalions in the city, told the Daily Telegraph.

But in at least one positive step, Syrian officials released blogger Razan Ghazzawi after 15 days in a Syrian prison, reports Amira Al Hussaini of Global Voices, an umbrella site for citizen bloggers from around the world. Ms. Ghazzawi, a US-born human rights advocate, was seized and charged with “establishing an organization that aims to change the social and economical entity of the state” and “weakening the national sentiment, and trying to ignite sectarian strife,” according to Lebanon’s Daily Star.