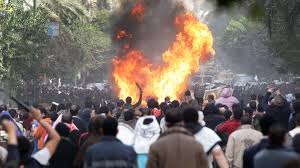 Violent clashes between rock-throwing protesters and soldiers continued for the second day on Saturday as tensions between activists and the country’s ruling military chiefs exploded. In more than 24 hours of violence, at least eight people were killed and more than 300 wounded, some by gunshots from security forces.

The clashes in central Cairo are the worst unrest since more than 40 people were killed in six-days of security crackdowns on demonstrators last month and have plunged the country into a political crisis in the midst of first post-Mubarak parliamentary elections. Activists say the military council, which took control from former president Hosni Mubarak on Feb. 11, has been resistant to change. They also accuse the council of continued human rights abuses and interfering in the political process to protect the military’s own economic and political interests.

The country’s newly appointed prime minister, Kamal al Ganzouri, addressed the nation for the first time on Monday, calling the recent events an “attack on the revolution,” and denying that the military shot anyone. He asserted that the people gathered in Cairo’s iconic Tahrir Square, the center of Egypt’s winter uprising, were not “pure” revolutionaries.

“We have never used anything that could be labeled as violence,” he said.

Activists were incensed by the remarks from a man they see as a puppet of the country’s military rulers. They pointed to the dozens injured by bullet wounds and videos of soldiers throwing rocks and glass from rooftops onto demonstrators below.

On Saturday, a fire burned in the building of the General Authority for Roads and Transport, between the cabinet and parliament buildings, on Qasr el-Aini Street. The military had erected a barricade of concrete and barbed wire between the security forces and protesters. Journalists and online activists said the military was confiscating cameras, going into the apartment buildings and hotels where journalists were to take their equipment and cracking down on media who they blame for the unrest and spreading “rumors.”

Videos of the military police show them flooding Qasr el-Aini Street, pointing guns and beating protesters to the ground.

The military council said in a statement late Friday that soldiers were acting in self-defense against protesters who shot at them and lobbed rocks and Molotov cocktails. It did not explain the deaths of protesters or the injuries attributed to gunfire and blamed the media for stoking the unrest.

According to the state news agency MENA, the violence erupted Friday after some protesters mobbed the cabinet building. But witnesses said the clashes started after military police seized a protester outside the building and beat him severely.

The country’s most organized and popular political force, the Muslim Brotherhood’s Freedom and Justice Party, condemned the crackdown and accused the military council of betraying Egyptian’s trust while implying that the military was using force to interfere in the political process.

“Whenever the situation calms down and the country turns to its historical elections, in order to achieve its real democratic transformation, someone tries to spark sedition, ignite the situation and instigate unrest, with clear and wanton desire to prevent stability, and disrupt the democratic process and the handover of power,” the party said in a statement.

The party added its voice to the chorus of people calling for an immediate investigation and compensation to the victims’ families. It also called for elections to continue uninterrupted and the date for presidential elections to be reaffirmed.

At least two members of a newly formed advisory council, expected to be an influential sounding board for the military rulers during the writing of a constitution, resigned in protest against the crackdown. Ahmed Khairy, a member of the Free Egyptians party, apologized for joining the military-appointed body.

“I announce my resignation from the advisory council and I apologize to all those who blamed me for joining,” he wrote on Twitter. “You were right.”