by yalibnan
467
What does a worsening of the Syria conflict mean for the Shia militant group Hezbollah, as it struggles to maintain its fragile coalition government in Lebanon and contain sectarian tensions there?
Share: 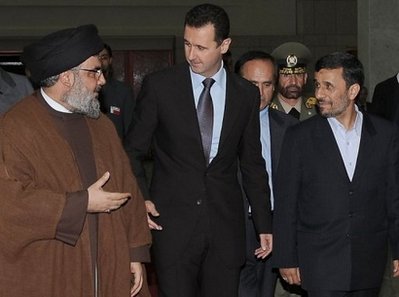 Editor’s Note: This is an edited version of an article from the ‘Oxford Analytica Daily Brief’. Oxford Analytica is a global analysis and advisory firm that draws on a worldwide network of experts to advise its clients on their strategy and performance.

What does a worsening of the Syria conflict mean for the Shia militant group Hezbollah, as it struggles to maintain its fragile coalition government in Lebanon and contain sectarian tensions there?

The Syrian uprising poses a significant challenge to Hezbollah’s political influence and military capabilities in Lebanon. The possible demise of the government in Damascus threatens the three-way anti-Israeli strategic alliance of Iran, Syria and Hezbollah. This alliance underpins Hezbollah’s central role in Lebanese politics.

Hezbollah’s leader Hassan Nasrallah made a rare public appearance last week in which he reiterated his support for the government in Damascus. Indeed, without Assad, Hezbollah would lose a major source of military assistance and political support. This in turn would significantly reduce its ability to threaten Israel.

For these reasons, there is a risk that Hezbollah could engage in covert activities inside Syria to assist pro-regime forces in repressing protest and fighting army defectors. However, it faces something of a dilemma given its public posture as a resistance movement supporting oppressed populations. Any such action would also place Hezbollah under greater international scrutiny.

In this context, would Hezbollah instead look for conflict with Israel? This might reinvigorate Hezbollah’s hard-core supporters and reinforce its resistance credentials. But the likelihood of an imminent new conflict remains low.

The Hezbollah leadership is aware that sparking a conflict with Israel could leave the group seriously weakened. Unlike before, it may not be able to rely on Iranian and Syrian backers to send the necessary military, logistical and financial support.

Still, along with heightened Israel-Iran tensions over Iran’s nuclear project, instability in Syria raises the risk that a miscalculation by any of the players could spark renewed Hezbollah-Israel fighting. Indeed, it is not impossible that if the Assad regime believes its collapse is imminent, it could resort to igniting limited hostilities with Israel in the Golan Heights. This could quickly escalate, dragging in Hezbollah. Yesterday, France said that it believes that Hezbollah was behind a December 9 attack on U.N. peacekeepers in south Lebanon.

Meanwhile, as Syria draws closer to civil war, intercommunal tensions in Lebanon are rising. The crackdown in Syria by Assad’s Alawi-led forces against largely Sunni areas has divided opinion in Lebanon along sectarian lines, raising the risk of armed conflict between its own Sunnis and Shias.

Hezbollah is keen to avoid this. Since Syria’s withdrawal from Lebanon in 2005, it has resisted attempts to disarm, partly by reaching out to old foes, building electoral alliances and adopting a more conciliatory approach. It now has significant representation in the cabinet and parliament. It has felt forced to make substantial recent concessions to reinforce its fragile coalition.

However, Lebanon’s political players sense that the Syrian crisis is weakening Hezbollah and are seeking to gain maximum benefit. As Assad’s government falters, Hezbollah will probably become less conciliatory in government and reassert itself. The present situation could also embolden Hezbollah’s Sunni political opponents and encourage them to provoke a confrontation with Hezbollah militants in Beirut. Hezbollah might find itself dragged into a conflict with Sunni groups whatever its own tactical stance.