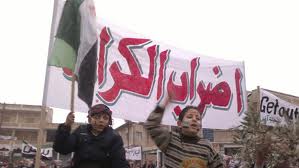 Prime Minister Adel Safar urged Syrians to vote in local elections on Monday to save the nation from “conspiracies against us” but activists struggling to oust President Bashar-al Assad rejected the ballot as irrelevant at a time of violent unrest.

As voting began, security forces battled pro-opposition army defectors in fierce clashes that are overshadowing the peaceful street protests that began the uprising against Assad nine months ago with fears that Syria is drifting into civil war.

Monday also saw the second day of the opposition’s “Strike for Dignity,” widely supported in protest strongholds around the country and which activists say security forces have tried to break by force and threats.

Safar appealed to voters to “stand together to save our country from the conspiracies against us.”

Opposition activists said security forces were forcing people to go to the polls in Idlib province.

Assad, whose minority Alawite family has held power over majority Sunni Muslim Syria for four decades, faces the most serious challenge to his 11-year rule from the wave of protests which erupted in the southern city of Deraa on March 18.

Voters were heading to the polls in the morning, state media said, but it was unclear if there would be a big turnout in cities such as Homs, Hama and Deraa, where residents have been too scared by violence to leave their homes in recent days.

Assad’s government said the polls are part of a process of reform leading to a parliamentary election next year and constitutional reform. But critics say the polls have little significance as municipal officials have little power in a centralized autocratic government.

Assad, a close ally of Iran, a key player in neighboring Lebanon and supporter of militant groups opposed to Israel, has said reforms cannot be rushed in Syria, where his Baath Party has held a monopoly on power.

Syrian authorities say they are carrying out reforms and say protesters include people with legitimate demands but also include “outlaws” and “terrorists.”

Activists said fighting erupted in the southern town of Dael when security forces moved in to break up the strike.

The Syrian Observatory for Human Rights also reported clashes between deserters and the army in parts of northern Idlib province, where at least three civilians were shot dead by the security forces.

Though the strike has found support in protest strongholds it has not taken hold in central parts of the capital Damascus or the business hub of Aleppo.

“We tell the Syrian people that this is a real opportunity to elect the right representatives who will undertake all their duties to the people,” Prime Minister Safar said. “Syria is passing through a very difficult stage.”

Four people were reported killed by security forces in Homs province on Monday, where the government says it is fighting “armed terrorist gangs” controlled from abroad. SANA news agency said the army killed one rebel, wounded others and arrested a leader.

Assad has been widely condemned abroad for a crackdown on peaceful protests, which the United Nations says has led to the death of over 4,000 people. His government says more than 1,100 members of the army, police, security and intelligence services have been killed.

Activists want the strike to take hold, boosting the number of Syrians prepared to oppose the government through civil disobedience rather than armed confrontation, which they fear could lead to civil war and play into the hands of Assad.

“The cost will be more human lives I am afraid. But it is less costly than an armed uprising and the regime dragging the country into a Libya-type scenario,” said Rima Fleihan, a member of the foreign-based opposition Syrian National Council.

SANA said the strike was a failure. It published an 8-page report to prove it, with pictures of busy shops and markets.

“The markets in Syrian provinces had normal movement yesterday … despite incitement by foreign-linked terrorist groups to stop economic and social activity,” it said.

Syria has barred most independent journalists, making it difficult to gauge the extent of violence, the strike, or participation in elections.

Syrian troops mainly from the 12th Armoured Brigade based in Isra, 40 km (25 miles) from the southern border with Jordan, fought rebels in the town of Busra al-Harir on Sunday.

The sound of explosions and heavy machinegun fire echoed in the rocky hills north of the town, where defectors from the army have been hiding and attacking military supply lines, according to residents and activists.

French Foreign Minister Alain Juppe said Paris believed Syria was behind an attack that wounded five French peacekeepers in the United Nation’s Interim force in Lebanon on Friday, in a development likely to raise Western pressure on Assad.

“We have strong reason to believe these attacks came from there (Syria),” Juppe said on RFI radio on Sunday. “We think it’s most probable, but I don’t have proof.”

Damascus said it “categorically denies any Syrian connection to this act” adding that Juppe’s charge “lacked any evidence.”

France has led Western efforts to force Assad to end the crackdown. Juppe was first to suggest setting up zones to protect civilians — a step that could put Western powers on the path to military intervention.