Syrians in Jordan attack their Embassy in Amman 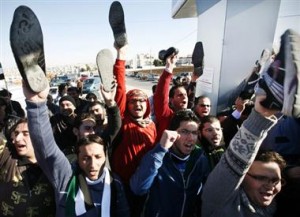 The Syrian Embassy in Jordan says a dozen of its nationals have attacked consulate employees, wounding at least two diplomats and four other people.

An Embassy statement says its guards arrested one of the attackers, identified as Syrian refugee Ahmed al-Shureiqi.

It says Jordanian police arrested eight others – all Syrians allegedly involved in the Sunday morning attack.

The attack was linked to the uprising against Syrian President Bashar Assad.

Police spokespeople did not answer repeated calls to confirm the arrest.

The group entered the embassy claiming they had paperwork to finish. They then beat up a security guard, the consul and another diplomat and several others.

No other details were immediately available.