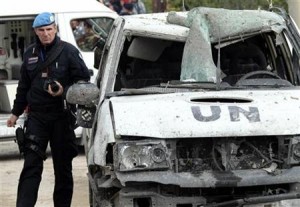 MTV quoted security experts as saying that the bomb that targeted the French UNIFIL patrol near the city of Tyre in south Lebanon on Friday weighed 10 kg ( 22 lbs).

The experts also revealed that the perpetrator detonated the bomb by remote control from a distance of about 150 meters which is the standard but failed to estimate the speed of the UNIFIL vehicle because the detonation took place few meters before the arrival of the vehicle to the location where the bomb was placed. This is why the 5 French peacekeepers were injured only otherwise all of them would have been killed.

This was the third bombing this year targeting the UNIFIL force, which is deployed to keep the peace along Lebanon’s southern border with Israel. No group has claimed responsibility for the attacks.

Many Lebanese leaders condemned the attack against the UNFIL forces.

Former PM Saad Hariri accused Syria of being behind the attack and said ” Friday’s attack was “another Syrian message from (President) Bashar” Assad.”

“Being human is not a crime, you should try it once in a while, killing is not a solution it’s the problem,” Hariri said on twitter after he was asked about his support for the Syrian protestors seeking to topple Assad’s regime.

Former Lebanese president and current Phalange Party leader Amin Gemayel condemned in a statement on Saturday the “terrorist” attack and said aimed at undermining stability and harm to France’s role in strengthening peace in the region.

Gemayel reiterated support for the role that the UN and France play in Lebanon and the region.

In a statement, the members of the Security Council condemned “in the strongest terms the terrorist attack” and “all attempts to threaten the security and stability of Lebanon.”

They “reaffirmed their determination to ensure that no such acts of intimidation will prevent UNIFIL from implementing its mandate.”

The 15-member body called on all parties to abide by their obligation to respect the safety of UNIFIL and other U.N. personnel, and to ensure that the freedom of movement of the mission is fully respected.