‘Every Syrian has lost someone. Now we are ready to fight back’ 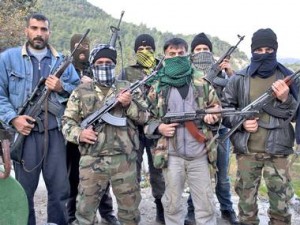 The sharp pop of gunfire draws little reaction. The soldiers of the Free Syrian Army (FSA) point to a multi-storey house just across the wide valley from their base above the village of Ain al-Baida, about a mile from the Turkish border. “That is where the military is,” says commander Abo Mohammad, who wears a camouflage jacket over civilian clothes and cradles an AK-47.

Unlike many of the 150 fighters he claims are positioned in Ain al-Baida, Mr Mohammad has not defected from the Syrian army. Originally from a village not far from this complex of abandoned buildings that houses the FSA fighters, Mr Mohammad says he spent April and May organising peaceful protests against President Bashar al-Assad’s regime.

In June, when the Syrian military’s infamous 4th Brigade came north, leaving a path of destruction in its wake, Mr Mohammad fled to Turkey, spending two months in a refugee camp near the border. But he grew tired of waiting, and returned to Syria to fight.

“People are dying in Syria,” he said. “No one came to help us. I did not accept what is happening. I can’t be patient, I prefer to die here.”

He is one of a growing number of civilians leaving their homes and joining the military defectors who make up the bulk of the FSA, a symbol of both the powerful hatred many ordinary Syrians feel towards the Assad regime and of how far the country has slid towards civil war.

The FSA – commanded by Riad al-As’aad, a defected colonel who is based in a Turkish refugee camp – has claimed responsibility for several attacks against Syrian security forces. In late November, the group agreed to co-ordinate with the Syrian National Council (SNC), an umbrella organisation of opposition groups based largely in Turkey.

While Turkey and Western countries have insisted that they are not supplying arms to the FSA, Mehmet Ali Ediboglu, an MP from Turkey’s opposition People’s Republican Party, claimed this week that arms were entering Syria from his country. “I don’t know how they got into the country – smuggling is the first answer comes to mind,” he told The National Turk.

Syria’s state news agency reported on Tuesday that the country’s border guards had stopped 35 armed men from entering from Turkey, further stoking tensions between the neighbours, which have heightened since the unrest began in March. Turkish leaders have repeatedly calling on President Assad to halt his crackdown, which the UN estimates has left 4,000 people dead.

Last month, the French magazine Le Canard enchaîné reported that French intelligence officers had contacted the FSA and were preparing for a “limited” intervention. Mr Mohammad, however, denied the reports and said the army defectors were using their state-issued weapons, with the opposition also looting arms from Syrian security forces. “Up to now we have seen no support from Turkey or other countries,” he said.

Reports of weapons crossing the border are difficult to verify, but the FSA has an expansive network of smugglers who travel from Turkey to provide medical equipment, winter clothing, food, satellite phones and sensitive messages.

One such courier, 26-year-old Udai Sayeed, was a political science student at Damascus University when the protests began earlier this year. At first, pro-Assad students tried to coerce him into working for them, giving him an electric cattle prod and, later, a pistol. But after a month of seeing regime violence, he went into hiding in Turkey. In a small flat in Antakya, a Turkish city close to the border, he and a small group of other Syrians organised the transport of bags for blood and serum into their beleaguered homeland.

“In many cities, people can’t go to hospitals because they kill a lot of the people there. So the wounded go to the houses. The bags are for those houses,” he said.

Another courier, named Nazir, said he would prefer to fight. “If I had a chance and its OK with the Free Syrian Army … everyone here would fight,” he said. “Everyone in Syria lost someone – a brother, a sister. A lot of people in Turkey are waiting for [the FSA commander] al-As’aad to call them.”

That sentiment was echoed by refugees in the Turkish camps. “We want to fight to protect our people from what Bashar’s regime is doing,” said Abo Hasan, a 32-year-old refugee in the Reyhanli camp.

But this army-in-waiting may need to be patient. While the FSA claims an increasing presence across Syria – especially in Homs, Idlib, and Deraa – in Ain al-Baida they say they control only about 500 metres down the hill from their complex of cinder block houses and sandbagged positions.

Calls for the international community to establish a buffer zone inside Syria might not yet have substantial international support, but the FSA’s numbers are growing. On average, two to three army defectors a week arrived in Ain al-Baida, Mr Mohammad said.

Because of the restrictions on reporting from Syria, it is impossible to confirm any of the wilder opposition claims of how much influence they have. There are also fears – which the Assad regime has been keen to stoke – that there is a sectarian element, with the largely-Sunni opposition facing off against the largely-Allawite regime supporters.

Asked why he had decided to stay and fight after defecting instead of fleeing to Turkey, he said: “It’s better here. I didn’t want to hide. I am trying to encourage my friends to come to the free army.”