Syria not in civil war but situation grave: ICRC 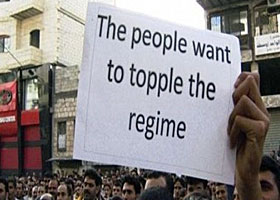 The humanitarian situation in Syria is serious but the country does not qualify as being involved in a civil war as the armed resistance lacks organization, the International Committee of the Red Cross (ICRC) said on Thursday.

ICRC President Jakob Kellenberger said the independent agency would not visit any more Syrian prisons until authorities fully accepted its terms but talks continued following its first ever visit to a Damascus detention centre in September.

Asked whether the situation in Syria now counted as a civil war under international law, Kellenberger told a news conference “No, not yet. I’m in discussion with our legal people and I think they feel it does not yet qualify according to our criteria.”

“So the fact that we have not yet qualified it as such is not a specific judgment on what we feel about the violence and its humanitarian consequences. It remains an issue basically because of one of the criteria — that is that of organization.”

Kellenberger said the agency had nearly tripled its budget for Syria for 2012 because it expected to expand its operations there considerably.

The ICRC assesses whether violent situations amount to civil war under international law including the Geneva Conventions and decisions by tribunals. Criteria include the duration, intensity and organization of violence against government forces.

It has delivered food and health supplies in major cities, including Homs, that have been hit by the crackdown on pro-democracy protests against the government of President Bashar al-Assad that began in March.

More than 4,000 people have been killed and over 14,000 are believed to be held in detention, the top United Nations human rights official, Navi Pillay, said last week.

A Syrian pipeline carrying oil from the east of the country to a vital refinery in Homs was blown up on Thursday in what the official news agency SANA said was an act of sabotage by an armed terrorist group.

The ICRC on Thursday launched its annual appeal, for 1.15 billion Swiss francs ($1.24 billion), to fund its humanitarian operations in hotspots around the world next year.

Its largest program will again be in Afghanistan (88.9 million Swiss francs) followed by Somalia (70.2 million francs). Its budget for Syria will nearly triple to 12 million francs.

“In percentage terms it is an impressive increase and it is clearly an indication that as an organization we have to plan for more assistance activities in Syria,” Kellenberger said.

In Libya, ICRC workers deployed in the eastern city of Benghazi days after the violence erupted in February. On March 10, Kellenberger said Libya had descended into civil war with increasing numbers of wounded civilians arriving in hospitals.

It was virtually the only agency to work on both sides of the front line separating pro-Gaddafi forces and rebels during the war, he said on Thursday.

“Our ability to deal with the unexpected will remain central to successful crisis management and the swift delivery of humanitarian aid for men, women and children in need,” he said.