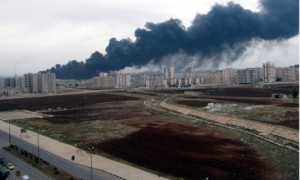 A vital Syrian oil pipeline near the restive city of Homs has been blown up by what state media are calling an “an armed terrorist group.”

The state-run SANA news agency called Thursday’s explosion an act of sabotage. The Britain-based Syrian Observatory for Human Rights also confirmed the report, but gave no cause for the blast. A spokeswoman for the group says they are investigating the incident.

A video on the Internet from opposition activists and pictures from the SANA news agency show massive flames and an enormous cloud of black smoke billowing into the sky outside Homs. SANA reported the fire burned for hours. Two similar explosions on Syrian oil pipelines occurred in July, and it remains unclear who was behind them.

This has been one of the most violent weeks in Syria since the pro-democracy uprising began nine months ago, with the Observatory reporting at least 63 people killed since Sunday.

It says 14 people were killed on Thursday. Nine of those died by sniper fire and random shooting in Homs and two by gunfire in the northwestern city of Idlib. Three defected army officiers were also killed in the crossfire in a rural area outside the western city of Hama.

A Syrian Observatory spokeswoman Hivin Kako told VOA the escalating violence is the result of the Arab League’s increasing pressure on the Syrian government to allow an observer mission into the country. She said there was a mass execution in Homs on Monday.

“This is its reaction. Especially the way they killed 34 people, choosing to abduct some Sunni people and kill them and throw their bodies in an Alawite area,” said Kako. “That’s just to push the country towards a civil war and try to oppress as much as possible.”

The nine-month-old uprisings that began with calls for President Bashar al-Assad to step-down have turned even bloodier as protesters take up arms.

The United Nations reports that at least 4,000 people have been killed since the unrest erupted in March.

In an interview with a U.S. journalist, aired on Wednesday, Mr. Assad denied that he ordered the killing of thousands of anti-government protesters.

Mr. Assad told ABC News he does not control the forces implementing his country’s brutal crackdown. The Syrian leader said there is “a big difference” between having “a policy to crack down and having mistakes committed by some officials.”

Syrian activists are calling for a nationwide strike, beginning on Sunday, in an attempt to bring down the regime through civil disobedience. The Local Coordination Committee, which is behind the country’s peaceful protests, is urging citizens to hold sit-ins; to close shops, universities and public transportation; and to refuse to work in the public sector.

The AFP reports that the Arab League will meet this weekend to make a decision on Syria’s request for sanctions to be lifted in exchange for allowing observers into the country to monitor the deadly unrest. The head of the 22-member regional bloc was in Iraq Thursday, urging the government to intervene in Syria.

Mr. Assad’s government said Monday it would conditionally accept an Arab League demand to let observers into the country to verify a pledge by President Assad to stop the deadly crackdown on opposition protesters.

The Arab League suspended Syria’s membership and approved a series of sanctions last month in response to Syrian defiance of a previous ultimatum to accept observers, end the crackdown and start a dialogue with the opposition. Syria had complained that a large observer mission would undermine its sovereignty.

The sanctions include travel bans and asset freezes on the Syrian leadership.