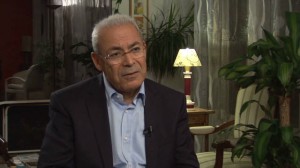 Arab League Secretary-General Nabil el-Arabi called for a meeting of foreign ministers to consider their response to Syria’s conditional agreement to allow observers into the country, according to a source close to the secretary-general.

No date or location has been revealed, but the call for the league meeting came a day after Syria said it would allow the observers in on the condition that the league immediately drop sanctions and agree to amendments that league officials have previously rejected.

“The Syrians’ acceptance of the protocol does not mean that we will suspend the sanctions,” el-Arabi told CNN on Monday.

Clinton invited activists belonging to the Syrian National Council to discuss their plans to establish a new democratic government in Syria and reach out to Syria’s minorities, many of whom remain loyal to the Assad regime.

“Obviously, a democratic transition is more than removing the Assad regime,” she told them. “It means setting Syria on the path of the rule of law and protecting the universal rights of all citizens regardless of sect or ethnicity or gender.”

Syrian Foreign Ministry spokesman Jihad Makdissi told reporters Monday that Syria is committed to reforms to end the crisis, pointing to decisions to pull back some troops and release some prisoners as evidence.

U.S. Ambassador Robert Ford headed back to Damascus, after leaving in October amid threats to his safety. Syria followed suit by recalling its ambassador to Washington.

Ford had antagonized the Syrian government with outspoken criticism of the regime and support for the protesters. Before he left, al-Assad supporters attacked the U.S. Embassy and the ambassador’s convoy.

State Department spokesman Mark Toner said Ford’s return “is among the most effective ways to send the message that the United States stands with the people of Syria.”

“He will continue the work he was doing previously,” Toner said. “Namely, delivering the United States’ message to the people of Syria; providing reliable reporting on the situation on the ground; and engaging with the full spectrum of Syrian society on how to end the bloodshed and achieve a peaceful political transition.”

The Local Coordinating Committees of Syria, an opposition umbrella group, said 31 people had been killed Tuesday. All but one of the deaths occurred in the city of Homs, the scene of much of the recent unrest, the group said.

The United Nations estimates more than 4,000 people have been killed in Syria since February, when al-Assad began attempting to put down anti-government protests with police and troops. The London-based Syrian Observatory for Human Rights said at least 34 civilians died in Homs on Monday.

CNN is unable to verify the reports because Syrian officials have restricted access to the country by reporters.

Syrian officials say they are battling “armed terrorist gangs” that prey on civilians. But the crackdown has led to widespread criticism throughout the region and economic sanctions by the Arab League and neighboring Turkey.

Syria is among the Middle Eastern and North African countries wracked by the “Arab Spring” demonstrations that arose after the revolt that toppled Tunisia’s longtime strongman in January. Subsequent uprisings ousted two of the region’s longtime autocrats, Hosni Mubarak in Egypt and Moammar Gadhafi in Libya, while Yemen’s Ali Abdullah Saleh has signed an agreement to step down by February in the face of widespread unrest there.

Iran and Lebanon’s Hezbollah movement are risking their future ties with Syria by supporting al-Assad now, the head of a leading Syrian opposition group says.

Burhan Ghalioun, the chairman of the Syrian National Council, told CNN in an interview airing Tuesday that Iran is “participating in suppressing the Syrian people” by backing al-Assad, whose family’s 40-year regime has been a longtime Iranian ally. He also warned that the crackdown could lead to international military intervention.

As for Hezbollah, the Lebanese militia that was allied with Syria during the years that Damascus dominated its smaller neighbor, Ghalioun said, “The Syrian people stood completely by Hezbollah once. But today, they are surprised that Hezbollah did not return the favor and support the Syrian’s people struggle for freedom.”