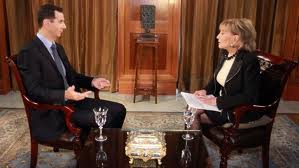 Syrian President Bashar al-Assad has given an interview to US television in a rare attempt to defend his regime’s deadly crackdown on protests to a Western audience, ABC News said on Tuesday.

The network said veteran television personality Barbara Walters travelled to Damascus to speak to Assad, who gave his first interview to US media since he launched the nine-month-old assault which the UN says has killed 4,000 people.

ABC News said that it would air the interview Wednesday. It said Walters questioned the Syrian leader about a recent UN report that documented the killing and torture of civilians including children.

Walters also pressed Assad on his “violent crackdown on protesters, the impact of economic and travel sanctions against his country, calls for the president to step down and whether he will allow Arab League monitors and foreign press free and unrestricted access to Syria,” the network said.

Syria has come under intense international pressure as Assad tries to crush the worst threat to his family’s four-decade rule over the country.

The Arab League has threatened to impose new sanctions unless Syria lets in monitors. In a letter late on Sunday, Assad’s regime said it will allow monitors but only if conditions are met.

Syria accuses “armed terrorist groups” of fuelling the unrest, which comes amid a wave of street protests across the Arab world this year that have toppled authoritarian regimes in Egypt, Libya and Tunisia.

Walters, 82, is known for interviews that seek to probe high-profile figures’ personal sides. She is a creator of the popular ABC News morning show “The View,” which features a panel of women hosts.