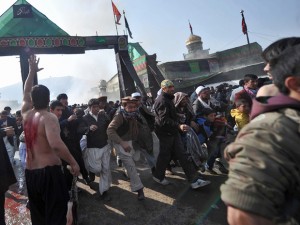 A suicide attack killed dozens of Shi’ite Muslims at a crowded Kabul shrine on Tuesday, and four others died in a smaller blast in a key northern city, in the worst sectarian violence Afghanistan has seen since the fall of the Taliban.

The Kabul bomb was the deadliest in the capital since 2008, and punctured any lingering sense of optimism from a conference on Monday where Western allies made firm but not specific promises to support Afghanistan after troops leave in 2014.

Bodies and blood were scattered down a street in the heart of old Kabul where a crowd of hundreds had gathered to mark the festival of Ashura, with chanting, and self-flagellation. At least 55 were killed and 160 wounded, some critically.

Afghans, who have previously been spared the large-scale sectarian attacks that regularly trouble Iraq and neighboring Pakistan, now face the grim prospect of a new type of bloodshed being added to the dangers of daily life.

“This is the first time on such an important religious day in Afghanistan that terrorism of that horrible nature is taking place,” Afghan President Hamid Karzai told journalists in Germany, where the conference on Afghanistan’s future was held.

Outside a Kabul hospital, mourners cried near a pile of bloody clothes and shoes. A woman in a dark headscarf clutching a bloodstained sports shoe said her son, in his early 20s, had died. “They killed my son … this is his shoe,” she wailed.

No one immediately claimed responsibility for the attacks in Kabul and northern Mazar-i-Sharif. The Taliban strongly condemned the bombings and blamed “invader enemies.”

Afghanistan has a history of tension and violence between Sunnis and the Shi’ite minority. But since the fall of the Taliban the country had avoided the large scale sectarian attacks that have troubled neighboring Pakistan.

“Afghanistan has been at war for 30 years and terrible things have happened, but one of the things that Afghans have been spared generally has been what appears to be this kind of very targeted sectarian attack,” said Kate Clark, from the Afghanistan Analysts Network.

“We don’t know who planted the bomb yet and it is dangerous to jump to conclusions but if it was Taliban, it marks something really serious, and dangerous, and very troubling.”

Shortly after the Kabul blast, a bicycle bomb exploded near the main mosque in northern Mazar-i-Sharif city, killing four, injuring 17 others, and sparking a fight at a university mosque where Shi’ites and Sunnis were both praying.

Four people were injured in the mosque scuffle, which broke out when worshippers began arguing about the blast.

Police later defused a mine, found near the site of the explosion and likely intended to target rescuers and security forces attending to victims of the bomb.

A motorbike bomb also appeared to be aimed at Shi’ite worshippers in southern Kandahar city, the Taliban’s spiritual home and centre of a strong push by NATO-led troops to push the insurgents out of their stronghold.

It exploded prematurely, injuring two policemen and three civilians, but causing no deaths.

“We cannot say for certain who the bomber’s target was, but it was probably the Ashura (ceremonies),” said Kandahar police chief Abdul Raziq.

“We have 100 per cent security. The enemies cannot enter the prayer sites. With such actions they want to show they exist.”

The Shi’ite Muslim festival of Ashura marks the martyrdom of the Prophet Mohammad’s grandson Hussein in the battle of Karbala in Iraq in the year 680.

Ashura is the biggest event in the Shi’ite Muslim calendar, when large processions are vulnerable to militant attacks, including suicide bombings. Pakistan has deployed tens of thousands of paramilitary soldiers and police during Ashura.

Blood has spilled between Pakistan’s majority Sunni and minority Shi’ite militants for decades.

Sectarian strife has intensified since Sunni militants deepened ties with al Qaeda and Pakistani Taliban insurgents after Pakistan joined the U.S.-led campaign against militancy after the September 11 attacks.

Photo: Afghan men run away at the time of an explosion during a religious ceremony in the centre of Kabul on December 6, 2011. At least 30 people were killed in an explosion at a Kabul shrine where Shia Muslims were marking the Day of Ashura Tuesday, an AFP photographer saw. The blast came in the city centre where Shias had gathered to carry out religious rituals to mark the day, a public holiday in Afghanistan.