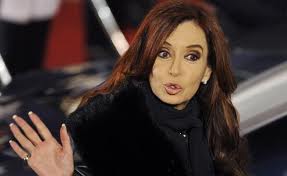 Argentina is quietly reaching out to Iran, worrying key Western powers and Israel as they try to tighten Tehran’s international isolation over its nuclear program, U.N. diplomats told Reuters.

Argentina’s ties with Iran have been virtually frozen since Argentine authorities secured Interpol arrest warrants for five Iranians and a Lebanese in 2007 in connection with a 1994 attack on a Buenos Aires Jewish center that killed 85 people.

Tehran denied links to the bombing but in July offered talks with Argentina to start “shedding light” on the case.

The 1994 attack came two years after a group called Islamic Jihad Organization, which was believed to be linked to Iran and the Lebanese militant group Hezbollah, claimed responsibility for bombing the Israeli embassy in Buenos Aires, killing 29.

For more than a decade Argentina appeared to do little to investigate the attacks. But when Nestor Kirchner became president in 2003 he vowed to reopen the cases, calling the neglect “a national disgrace.” Several years later former Iranian President Ali Rafsanjani was among those indicted by Argentine prosecutors and sought by Interpol.

But there have been signs of a thaw in the two nations’ frosty ties.

Argentine exports to Iran, which dropped to a few tens of millions of dollars annually amid sour relations, have grown in recent years, soaring more than 70 percent last year to $1.5 billion. Iran is the biggest buyer of Argentine corn, a key crop for the Latin American country as it strives to bolster its trade surplus.

“As the rest of us work to pressure Iran to end its nuclear weapons program and stop supporting terrorism, Argentina’s government has been considering moving in the opposite direction,” a European envoy said on condition of anonymity.

On the surface, Argentina’s positions on Iran appear little changed. In May, Argentine prosecutor Alberto Nisman, who heads a special unit dedicated exclusively to investigating the 1994 bombing, had the Interpol arrest warrants renewed.

Last month, Argentina joined a majority of U.N. member states in the General Assembly’s human rights committee to vote for a resolution condemning Iran for its human rights record.

But there are signs that things are changing. In September, Argentine President Cristina Fernandez told the U.N. General Assembly that Buenos Aires was ready to engage in dialogue with Iran, though she also urged Tehran to make good on its offer to help investigate the bombing.

“This is an offer to dialogue that Argentina cannot and should not turn down,” Fernandez said in her speech.

“Iran and Argentina have recently been taking a number of overt steps – in some cases in response to pressure brought to bear by Iran – to open a clean slate in the countries’ political relations,” a Western diplomat told Reuters.

Iran has every reason to want to mend relations with Argentina. Under sanctions and increasingly isolated due to its nuclear program, Tehran has few allies and needs friends. Argentina is also on the 35-nation board of the U.N. nuclear watchdog, where Iran’s nuclear program is a key issue.

Diplomats said Argentina’s motives for warming up to Iran were unclear. In addition to boosting trade with Iran, some envoys said Argentina was pursuing a Brazilian-style foreign policy emphasizing ties with nonaligned developing nations.

“In general, we see a ‘Third Worldism’ in Argentina’s foreign policy – asserting independence from the big powers, seeking out new relations with countries like Iran,” an Israeli official in Jerusalem told Reuters.

Several European diplomats noted that Fernandez is a close ally of regional leftists like Venezuela’s Hugo Chavez and Bolivia’s Evo Morales, who have warm ties with Iran.

Argentine Foreign Ministry officials did not respond to requests from Reuters for comment.

Iran’s nuclear program was one of the topics U.S. President Barack Obama brought up during his meeting with Fernandez last month on the sidelines of a Group of 20 meeting in France.

The United States has had its own difficulties with Fernandez’s government. There are concerns about unresolved payments to U.S. firms and bondholders. In February, Argentine officials seized guns, ammunition and communications equipment from a U.S. Air Force plane that had landed in Argentina. The items were later returned but the incident annoyed Washington.

The Jewish community in Argentina, the largest in Latin America, has also grown increasingly worried since the Argentine newspaper Perfil reported in March that Timerman was holding secret negotiations with Iranian officials and had offered to drop the investigation into the 1994 attack.

That unease is shared by Israel. The Israeli official said Argentina was unlikely to push hard on the arrest warrants for the 1994 attack: “The sense here is that they’re unlikely to pull out the stops in order to see the warrants enforced.”

Suspicions about Iranian intentions in Argentina continue to this day. Earlier this year, Saudi Arabia warned Argentina of a possible Iran-backed plan to attack Saudi and Israeli embassies in Buenos Aires that ran parallel to a a plan to kill the Saudi U.S. envoy, an Argentine diplomatic source said.

Tehran denied allegations that it planned such attacks.

In a recent interview with Reuters, Mohammad Javad Larijani, a senior Iranian official and adviser to the country’s Supreme Leader Ali Khamenei, said Iran would like repair ties with Buenos Aires that were damaged by Israel.

“Relations between Iran and Argentina have been the subject of Israeli sabotage,” he said. “I don’t think there is any basic difficulty in redeveloping our relations.”

He also dismissed the idea that the arrest warrants would lead to any action by Iran or Argentina, describing them as “obsolete.” Larijani added that Iran was working to expand its presence in, and trade with, South America.

European diplomats, however, said that there were limits on how close Argentina can get to Iran.

Not only would the government want to avoid unduly angering Washington, dropping the investigation of the 1994 attack altogether, as Iran would like, would be very difficult.

“Argentina has always taken a strong public line on Iran,” an envoy said. “Another line would be political suicide.”