by yalibnan
507
Nearly nine months into the Syrian uprising, many protesters are pinning their hopes on an increasingly bold group of army defectors to give their revolution a fighting chance against President Assad's forces.
Share: 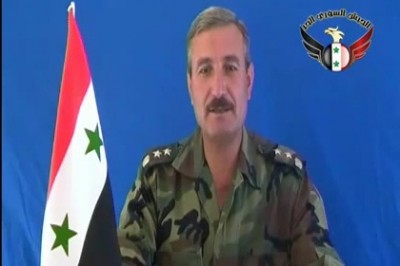 Beirut, Lebanon – Nearly nine months into the Syrian uprising, many protesters are pinning their hopes on an increasingly bold group of army defectors to give their revolution a fighting chance against President Bashar Assad’s fiercely loyal forces.

But as the Free Syrian Army gains power, the defectors could make it harder for the West to give strong diplomatic support to a movement that so far has been largely peaceful. The FSA also could give the regime an excuse to crack down even more strongly, adding to the body count in a country where more than 4,000 people already have been killed since March.

U.S. officials say the Free Syrian Army — thus far — has not essentially changed the dynamic in Syria or how the U.S. assesses the situation: that the Syrian regime is the cause of the unrest, and Assad must go. American officials have not condoned the violence from the FSA, but they have described it as an understandable reaction to months of oppression.

Still, the U.S. and others are urging the protesters to remain peaceful because they fear that violence plays into the hands of the regime, and because they believe the FSA isn’t strong enough to pose a serious threat to the Syrian government’s military dominance.

An Obama administration official said the situation might change, however, should the FSA transform itself into a national rebel movement similar to the National Transitional Council in Libya. He asked to remain anonymous because he was not authorized to speak publicly about the issue.

But the likelihood of such an evolution is unclear.

For now, the Free Syrian Army holds no territory, appears largely disorganized and is up against a loyal and cohesive military that will stop at nothing to protect the regime.

The FSA’s leader, breakaway air force Col. Riad al-Asaad, is based in exile in Turkey, making communication with defectors on the ground one of the biggest challenges to the group’s growth. But FSA attacks have grown more sophisticated in recent weeks, prompting worldwide alarm that the situation in Syria is spiraling toward civil war.

On Saturday, more than two dozen people were killed in hot spots around the nation, most of them in a battle between troops and the growing force of defectors, activists said.

The sectarian divide in Syria, where members of Assad’s minority Alawite sect rule over a Sunni Muslim majority and others, means an insurgency could escalate quickly.

The FSA’s leader acknowledges nearly all the defectors under his command — he estimates there are some 15,000, although the figure could be lower — are low-level Sunni conscripts. The men are armed with rocket-propelled grenades, rifles and guns they took with them when they deserted, as well as light weapons they acquired on the black market.

The group has claimed responsibility for brazen attacks on air force intelligence headquarters and other military installations, adding to the bloodshed carried out by the regime.

November was the deadliest month of the uprising, with at least 950 people killed nationwide, activists say.

As the death toll mounts, attacks by the FSA could stoke the fears of those Syrians who have yet to choose a side in the conflict. Many Syrians have stayed on the sidelines, fearing that the alternative to Assad would be chaos.

The regime has added fuel to those fears, blaming the bloodshed on armed gangs and extremists acting out a foreign agenda to destabilize the regime.

Assad has played on some of the country’s worst fears to rally support behind him, painting himself as the lone force who can ward off the kind of radicalism and sectarianism that have bedeviled neighbors in Iraq and Lebanon.

Unlike the armies of Tunisia and Egypt, Syria’s military has stood fiercely by the country’s leader as Assad faces down an extraordinary protest movement.

Assad, and his father before him, stacked key military posts with members of their minority Alawite sect over the past 40 years, ensuring the loyalty of the armed forces by melding the fate of the army and the regime.

A recent U.N. report estimated that Alawites make up the majority of the key positions in the country’s security apparatus, including the officer corps of the armed forces, the Republican Guard and the feared 4th Division.

The top U.S. diplomat for the Middle East, Jeffrey Feltman, said in recent congressional testimony that the regime was “executing a deliberate and bloody strategy of channeling peaceful protest into armed insurrection.”

Assad’s strategy, he argued, was to stoke fears among Syrian minorities with “blatant propaganda” about foreign conspiracies and terrorism, while claiming the regime is their only protection from sectarian violence.

“Make no mistake: the regime is driving the cycle of violence and sectarianism,” Feltman said. “The Syrian people are resisting it, but the regime is working diligently to fulfill its own prophecy of inter-communal violence.”