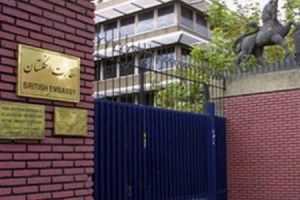 Dozens of hard-line Iranian students have stormed the British Embassy in Tehran, bringing down the British flag and throwing documents from windows.

The students clashed with anti-riot police and chanted “the Embassy of Britain should be taken over” and “death to England.”