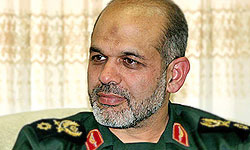 Iranian Defense Minister Ahmad Vahidi warned the United States against attacking Iran, saying the Iranian Armed Forces will teach it how to fight and (make it) realize what fighting really means”.

Addressing a parade of about 50 thousand revolutionaries in the southwestern city of Bushehr on Sunday, Vahidi warned that it will sink the US warships :

” If the enemy attacks Iran, it must be ready to answer some questions such as how long it can fight against the Islamic Republic and how much it is ready to watch the sinking of its warships and ships.”

Commenting on Israeli threats to attack the Iranian nuclear facilities , Vahidi warned:“Why does the Zionist regime issue such threats? For how many missiles has it readied itself: 10 thousands, 20 thousands, 50 thousands, 100 thousands, 150 thousands, or more?”

He added, “The Zionist regime has not yet paid the price” for the massacres it committed in Sabra and Shatila and the Gaza Strip, and, if this regime attacks Iran, the Islamic Republic will take revenge for those crimes.

He did not say whether the 150, 000 missiles will be fired from Iran or by Hezbollah in Lebanon or Hamas in Gaza.

Last Thursday the military adviser to Iranian Supreme Leader Ali Khamenei , General Yahya Rahim Safavi warned Israel that should it attack Iran’s nuclear sites the Islamic Republic will rely on its allies Hezbollah and Hamas to do the fighting.

“There will be no need for Iran to launch ballistic missiles at Israel, because all the Zionist cities are within the range of our ally Hezbollah’s Katyusha (rockets),” he said.