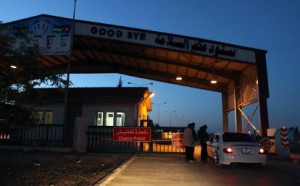 Shots rang out at the Jordanian-Syrian border late Sunday as Syrian forces attempted to prevent civilians from entering the Kingdom, hours after an Arab League decision to impose sanctions on Damascus.

Syrian soldiers opened fire on a married couple and their young child as they attempted to enter the Kingdom late yesterday near the Jaber border crossing, some 90 kilometres north of the capital, according to Minister of State for Media Affairs and Communications and Government Spokesperson Rakan Majali.

Initial reports from civilians living near the border region identified the gunfire as clashes between Syrian and Jordanian forces, a claim the spokesperson denied.

Incidents like this one, which occurred hours after the Arab League endorsed a series of economic sanctions targeting the regime of Syrian President Bashar Assad, have become “commonplace” over the past few months, he said.

“This has now become a very normal incident that happens nearly every day, but often without notice,” Majali told The Jordan Times.

According to Majali, the woman was rushed to Mafraq Military Hospital where medical sources indicated she was listed in serious condition as of late yesterday, adding that her husband and child were not injured in the incident.

The incident will not register a response from the Jordanian government, the spokesperson said, noting that the Kingdom will continue to extend efforts to “ensure the humanitarian protection” of Syrian civilians.

The humanitarian impact of the Syrian crisis has become an increasing concern for Jordan, which has hosted thousands of civilians fleeing violence since mid-February, with over 1,500 Syrians registered with the UN refugee agency.

Although Jordan has not offered asylum to Syrians, authorities near the northern border provide emergency medical attention and shelter to displaced Syrians, with preparations in place for any potential large-scale humanitarian crisis.

A majority of Syrians in Jordan do not seek support from authorities or the UN as they are able to financially support themselves during their stay, according to the refugee agency.

Majali ruled out that yesterday’s incident had any connection to Amman’s support for Arab League economic sanctions, stressing Jordan’s position supporting joint-Arab action to bring an end to the violence in Syria.