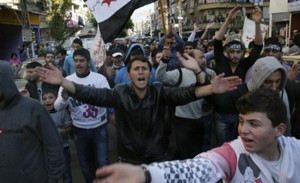 The new Libyan government is well on its way to help Syrian fighters against President Bashar al-Assad’s regime with arms after a meeting held in Istanbul between the two sides, a newspaper reported Saturday.

A Libyan source, who spoke on the condition of anonymity, told Britain’s Telegraph, that the aid will extend beyond providing the Syrian fighters with arms but that Libya could also offer potential volunteers to help up rebels in their struggle against Assad’s regime.

“There is something being planned to send weapons and even Libyan fighters to Syria,” said the Libyan source.

The Libyan source also heralded that “there is a military intervention on the way. Within a few weeks you will see.”

According to the newspaper, preliminary discussion about arms supplies dates back to early November 2011, when members of the main opposition group, the Syrian National Council [SNC] visited Libya.

“The Libyans are offering money, training and weapons to the Syrian National Council,” said Wisam Taris, a human rights campaigner with ties to the SNC.

Due to logistical difficulties, large shipments of Libyan weapons are not yet received by the Syrian fighters, said activists, adding that there are proposals to create a buffer zone inside Syria, monitored by the Arab League, or the likely emergence of an area inside the country controlled entirely by rebels.

Meanwhile, the Telegraph quoted sources from the Libyan town of Misrata as saying that some weapons may already have been shipped.

Libya’s interim government was the first to recognize Syria’s opposition movement as the country’s ‘legitimate authority.’

In addition to the potential Libyan assistance, Turkey, a former ally to Assad’s government, is already sheltering about 7,000 Syrian opposition activists and the dissident Free Syrian Army.

Photo: Lebanese and Syrians living in Lebanon carry a Syrian flag as they march in a protest in solidarity with Syria’s anti-government protesters, in Tripoli, northern Lebanon. (Reuters)