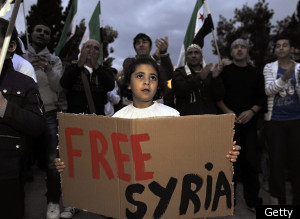 At least 11 civilians, including three children, were killed Saturday by security forces across Syria, the Local Coordination Committees of Syria activist group said.

Seven of the deaths occurred in Homs, two in Deir Ezzor, and one each in the Damascus suburbs of Kanaker and Idlib, said the group, which organizes and documents anti-government protests.

“The martyrs were targeted by the armed terrorist groups while they were in the line of duty in the governorates of Damascus Countryside, Homs and Hama,” it said. “Relatives of the martyrs expressed pride in their son’s martyrdom who sacrificed their lives to defend their homeland, stressing that Syria will remain steadfast in the face of the conspiracy which targets its unity and stability.”

Syria, meanwhile, failed to respond to a Friday deadline for it to allow Arab League observers into the country to monitor the government’s response to civil unrest.

That failure has moved the country a step closer to economic sanctions from its neighbors, a senior Arab League diplomat said.

“The Syrians responded with more requests to amendments to the protocol; they did not reject or accept,” he said.

The finance and economic ministers of the Arab League were to meet Saturday to draft potential sanctions that will be discussed Sunday by the Arab League’s foreign ministers, said the diplomat, who did not want to be identified because of the sensitivity of the negotiations.

These could include halting dealings with Syria’s central bank and airlines, the official said.

Turkish Foreign Minister Ahmet Davutoglu said Syria risked international isolation if it continued on its present path — and, that the bloodshed resulting from its crackdown on pro-democracy protests could not be tolerated.

“Syria has to make a decision,” he said in Istanbul alongside his Italian counterpart, Giulio Terzi. “It will either continue this crackdown policy against its people and become isolated more and more, or it will say yes to this well-intentioned Arab League proposal, sign this protocol and observers will monitor the situation on the ground by going to all Syrian cities.”

In New York, a representative of Ban Ki-moon said Friday that the U.N. secretary-general “welcomes the efforts of the League of Arab States to end the bloodshed and promote a political solution” and urged Syrian authorities to agree to the league’s proposal to send an observer mission to protect civilians in Syria.

Since March, protesters in cities across the country have been demanding al-Assad’s ouster and democratic elections.

SANA said the move by Arab League diplomats meeting in Cairo was unprecedented. The league was rejected by the Syrian people as “a tool for foreign interference,” it said.

“The sanctions include stopping air flights, trade exchanges and monetary dealings with the Syrian government and freezing its assets, which harms the interests of the Syrian people,” it reported.

The 22-country Arab League suspended Syria from its membership this month after President Bashar al-Assad’s regime ignored demands to end its crackdown on citizens.

Adding to the pressure on Damascus, the United Nations Committee Against Torture said Friday it is “deeply concerned about gross and pervasive human rights violations in Syria,” which are allegedly taking place “in a context of impunity.”

“Of particular concern are reports referring to children who have suffered torture and mutilation while detained; as well as cases of extrajudicial, summary or arbitrary executions; arbitrary detention by police forces and the military; and enforced and involuntary disappearances,” said Claudio Grossman, who heads the expert panel.

Reliable sources indicate the abuses “are allegedly conducted under direct orders from public authorities, at their instigation or with their consent or acquiescence,” Grossman said.

The committee has asked Syria to provide a special report by early March indicating it is abiding by its obligations under the U.N. Convention against Torture, to which Syria is a signatory.