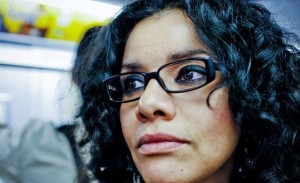 Egyptian-American journalist Mona Eltahawy was subjected to hours of sexual assault by police during her detention after taking part in Tahrir Square protests, she said Thursday on her Twitter account.

“Besides beating me, the dogs of (central security forces) subjected me to the worst ever,” Eltahawy said.

“Five or 6 surrounded me, groped and prodded my breasts, grabbed my genital area and I lost count how many hands tried to get into my trousers,” she said.

“My left arm and right hand are broken (according) to Xrays,” she said, posting pictures of herself in casts.

Earlier Eltahawy, an award-winning journalist and public speaker on Arab and Muslim issues based in New York, tweeted that she had been released after having been “beaten, arrested in interior ministry.”

Her detention came as protesters in Tahrir Square demanded an end to military rule. At least 38 people died and over 3,000 were injured since Saturday when clashes began.