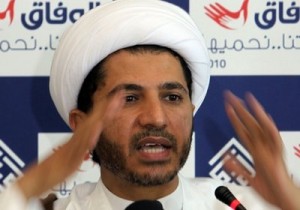 Bahrain’s main opposition group has called for the resignation of the government following the publication of a report exposing the use of excessive force and systematic torture against pro-democracy protesters earlier this year.

Al-Wefaq, the largest organisation representing the majority Shia, also said the Bahrain Independent Commission of Inquiry’s findings that there was no discernable link between Iran and the protesters should lead to the withdrawal of Saudi troops, the pretext used for Saudi-led Gulf forces to enter the kingdom in mid-March.

The government insists that it has evidence of interference but declined to release it to the commission for security reasons.

As Bahrain digests the implications of the panel’s findings, Khalil al-Marzooq, a senior Wefaq official, told reporters that the group would consider working with the crown prince, Sheikh Salman bin Hamad Al Khalifa, if he was empowered to implement the report’s recommendations free of interference from hardliners.

“If he is given a chance to revive his initiative for a resolution we are ready to work with him,” he told reporters.

The BICI report says the opposition missed a chance for significant constitutional reform by failing to grab the opportunity of a national dialogue leading to a constitutional referendum in the days before Saudi troops entered Bahrain to back the government’s crackdown.

Al-Wefaq also called for the UN to play a role in implementing the report’s recommendations.

These include setting up a committee of official and opposition members to implement the report, and the creation of an impartial mechanism to hold public officials to account for systematic use of torture, among other abuses.

The BICI made many criticisms of the way investigations into abuses were carried out by the government and called for judicial reforms.

Many in the Shia community fear the government will drag its feet on implementing changes called for by the report, given previous pledges of accountability that have not been fulfilled.

Mourners are gathering in the Shia village of Aali south of the capital to bury a man who died in a car accident on Wednesday.

His family claims he died when his car was rammed by a police SUV; the government says he careered into a house.

Other funerals in recent months have sparked fierce clashes between protesters and security forces.

This could prove to be the first test of whether King Hamad bin Isa al-Khalifa’s acceptance of the report’s findings of regular use of excessive force, such as tear gas, shotguns and rubber bullets, will make a difference to the way riot police interact with protesters.